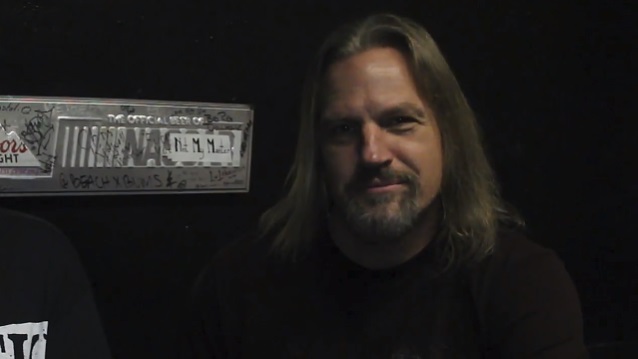 Prior to the group's January 14 performance at the Whisky A Go Go in Los Angeles, California, FATES WARNING drummer Bobby Jarzombek was interviewed by The Jimmy Cabbs 5150 Interview Series. The two-part conversation can be viewed below. A few excerpts follow (as transcribed by BLABBERMOUTH.NET):

On the group's plans to record a live album during their in-progress European tour:

Bobby: "We have nine shows there, and we're going to record all the shows. The good thing about technology these days is, unlike back in the day where you had a big mobile truck that you had to put outside and record one show, and there's an engineer back there turning knobs and all that kind of stuff, you don't have to do that anymore. You can take your little computer and your Pro Tools and your little plug-ins and get it all straight from the stage, straight though the mixing board, straight through the Pro Tools, record all the performances. We're going to get nine shows; we have some alternate songs that we're doing in two different set lists, so we'll have tons of material. It will be over two hours worth of material to choose from, probably two-and-a-half hours worth of material. I'm not sure what will make it to the live record at this point, but the plan is to record all these shows, listen back to them and all the tunes, and then in the spring release the multi-disc live record."

Bobby: "I think any time you're replacing a drummer like Mark Zonder, who was the drummer for the band through probably the most critically acclaimed progressive era and those records, I think any time you're replacing a drummer of his talent that there's sort of a little bit of that pressure, but I'm a different drummer. I play a little bit stylistically different than he does. I respect everything that he does. As long as I learn those signature parts and play them the way the audience and the fans want to hear it. I kind of do a little bit of my own thing, just because I am a little bit of a different drummer, but I respect the parts, so I play it pretty much that way. I don't think I was intimidated; I think I was just kind of excited to be a part of the band that I had followed for so many years."

Bobby: "We're all older guys, and FATES WARNING has been around a long time, but I grew up listening to music in the late '70s and listening to pop radio, as we all did, because it was limited stations back in those days. Then I kind of got into, when I started playing drums, actually, just playing along to songs. I think that's the thing — it's important to be not a geek about it and to play the songs that you love to play along with. I did that for years, and then as I started listening to drumming in a little more technical aspect, I started picking up on things, bands like RUSH and Neil Peart, Terry Bozzio, Simon Phillips, a lot of guys that were more progressive. The Frank Zappa stuff, the band U.K. that Bill Bruford and Terry Bozzio both played with, so I got more into the technical aspect, but you never lose sight of the songs, the thing that brought you to music in the first place and to love music. As you go on, you develop your own style, whatever it might be. I think from being more into the heavier stuff, my style kind of lends itself to more the double-bass, but maybe some intricate stuff on top. Every drummer has a little bit of that, but I think the blend, especially with doing a couple of records together with FATES WARNING, we have developed sort of a style that kind of blends with all of our influences. That's what makes music so special – it's the blend of those particular musicians."

On the importance of making albums that sound "natural":

Bobby: "On our records, we don't do all that crazy sort of quantizing and stuff like that. In progressive music, it can very sterile if you do that. Pop music, because it's dance-based, you can do that, because the listener isn't listening for that. They're listening to that same groove over and over. With progressive, it's about the individuality of the musician, and if you take that away, and you squash it and make it all perfect, you've totally eliminated that. You could have just programmed a drum machine. To me, that's wrong to do with music that's an expression of the individual."

On the fact that the band now has fans spanning multiple generations:

Bobby: "It's always great if you see a younger kid singing the lyrics to something that was recorded in the '80s. That's the great thing about music. If you think about music the way it was when we were growing up in the '70s or '80s, you didn't really listen to music from the '40s, your dad's music. Only yours. We're in the year 2018, but people are listening to music [from] the '80s, and even '70s or '60s. That's so weird — you think about how 50 years ago, that music that was recorded is a milestone. Not that there's anything wrong with the music from the '40s, because I love the '40s and the '50s, but when I was growing up, I didn't listen to that — I listened to the music I grew up with. You didn't really go back that far. Kids are listening to [LED] ZEPPELIN and whatever classic stuff today."

All of FATES WARNING's performances during their current European tour, which kicked off January 18 in Essen, Germany, will be recorded for a live release to be mixed by Jens Bogren.

Bogren also worked with FATES WARNING on the band's latest album, "Theories Of Flight", which was released in July 2016 via InsideOut Music. The cover artwork for the CD was created by Michigan artist Graceann Warn.

Performed by the FATES WARNING lineup that returned to form with 2013's acclaimed "Darkness In A Different Light" release, "Theories Of Flight" was produced by guitarist Jim Matheos and mixed/mastered at Fascination Street Studios (OPETH, SYMPHONY X). 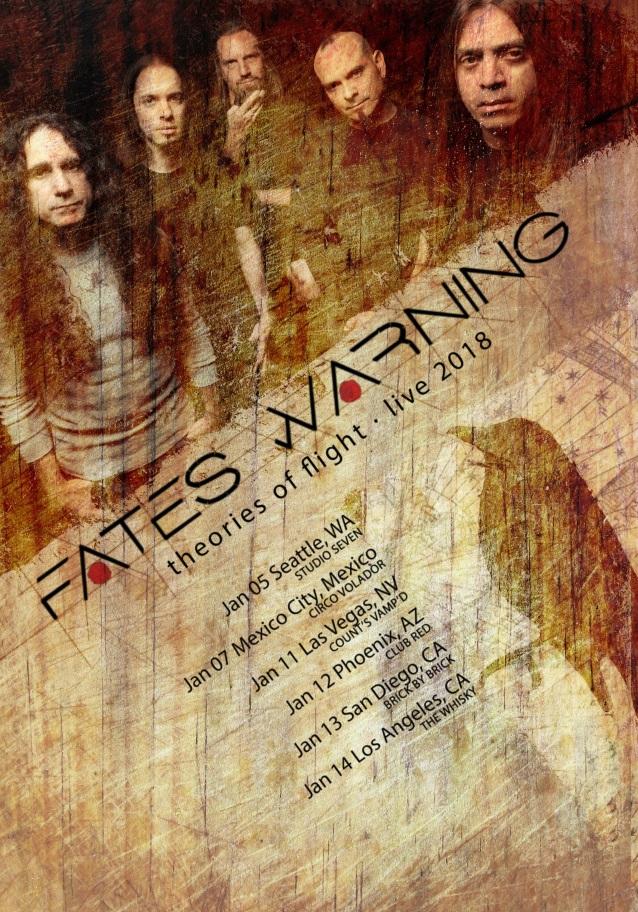