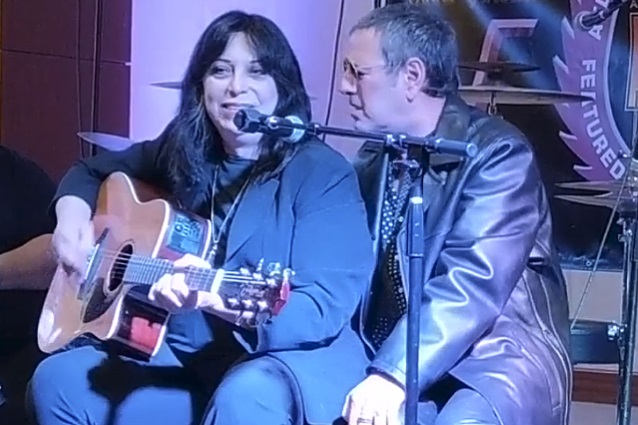 Former KISS guitarist Vinnie Vincent was joined by his ex-VINNIE VINCENT INVASION bandmate Robert Fleischman earlier today (Saturday, January 20) at the Atlanta KISS Expo 2018 to perform an acoustic version of the VINNIE VINCENT INVASION song "Back On The Streets". Video footage of the impromptu performance can be seen below (courtesy of Mike Brunn and Talking Metal).

In his first public interview in more than two decades, Vincent told SiriusXM's Eddie Trunk on Friday that he still feels "very strongly" about the two VINNIE VINCENT INVASION albums he released three decades ago, 1986's self-titled effort and 1988's "All Systems Go". However, Vinnie said that "the second record should have never happened. Rob [Fleischman] should have stayed with the project. The basic sound of that record was like [Jimmy] Page and [Robert] Plant — it was Rob and me. That first record was pretty red-hot. It was my vision; Rob singing; everything was just right. Second version of it should have been aborted, should have never happened. I had the power; I should have taken it. I should have called the shots, which should have been, 'Stop this. Revamp it. Go back, let me get the people I need.' The people that were involved with it at that time should have not been involved with it, but it was such a publicity machinery piece of... it was like a product. It was all publicity and hype. The songs, I felt were really good, but I didn't feel the music came out to be... the records weren't what I would have done. I would have never settled on records like that. When I say records, the first one, yes; the second one, no; and that singer [Mark Slaughter, who sang on 'All Systems Go'] was unbearable as far as I'm concerned."

Vincent told SiriusXM that he has accepted the invitation to appear at Gene Simmons's Nashville stop of the KISS bassist/vocalist's promotional tour in support of his box set, "The Vault", which will take place on April 14.

Despite the album's success, Vincent was fired by KISS after the "Lick It Up" touring cycle came to an end, allegedly due to a dispute over both the terms of his employment contract with the band and royalties. From there, Vincent founded VINNIE VINCENT INVASION, which recorded the aforementioned two albums.