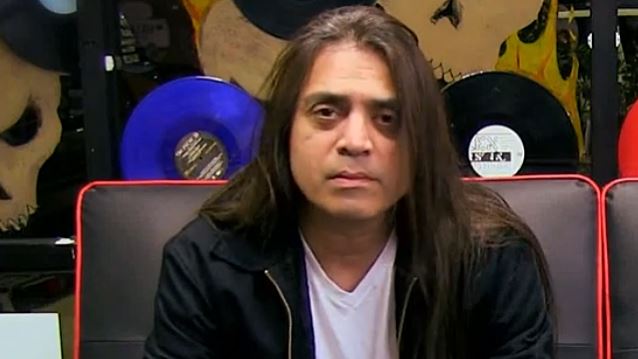 FATES WARNING singer Ray Alder believes that the group's "lackadaisical" attitude towards recording and touring was was what ultimates cost him and his bandmates the kind of sustained commercial success that is enjoyed by DREAM THEATER, a band that many consider to be the premier progressive metal outfit in the world.

Formed in 1982 by vocalist John Arch, guitarists Jim Matheos and Victor Arduini, bassist Joe DiBiase, and drummer Steve Zimmerman in Hartford, Connecticut, FATES WARNING went through a number of lineup changes in its 30-year-plus career while releasing eleven studio albums, two live albums, one compilation album, one VHS, three DVDs (each of them features live concerts) and four demo tapes. The band experienced major American commercial success with the 1986 release of their third studio album, "Awaken The Guardian", which peaked at No. 191 on The Billboard 200 chart and became the first LP released on Metal Blade to enter that chart. Their next three albums, "No Exit" (1988),"Perfect Symmetry" (1989) and "Parallels" (1991),were also successful; the first two peaked at No. 111 and No. 141 on the Billboard 200, respectively.

Asked by Brazil's "Wikimetal" what he thinks about former DREAM THEATER drummer Mike Portnoy saying DREAM THEATER often gets mistakenly credited for creating a genre that FATES WARNING launched years earlier, Alder said: "I get asked that a lot." He continued: "It's funny. They changed everything a lot, DREAM THEATER. They're amazing, amazing musicians, and I'm very happy that they have all the success they have. But their formula was much better than ours. You know, we would do an album and do a tour, and then we'd stop for a couple of years, or four years, and we'd another album and tour. They had the right idea — do an album, tour, do an album, tour, do an album tour — and they built their fan base by being there all the time. And the lack of us touring and putting albums out, it certainly hurt us a bit as far as fans [are concerned]. You know, we [release albums and play to] our fans that are there, and then we're not there anymore, so they move on to something else. I think a lot of it is our fault for being a bit lackadaisical in our performance and writing and things like that… Well, not in our performance — we definitely give everything we have when we play live — but I think that's probably one of the things."

Alder added: "But it doesn't bother me at all [that DREAM THEATER gets that kind of credit]. I mean, again, I wish them all the luck in the world, and it seems like they have it. [Laughs]"

In a 2009 interview with The Mooreatorium, former FATES WARNING drummer Mark Zonder was asked what he would say to those who credit the band with defining the progressive metal genre. "I think 'Eye To Eye' and 'Monument' are pretty close to perfect songs," Mark replied. "That is a very nice compliment, but it would have been nice for the band to progress and become a bit more successful in the commercial sense. I think that would have helped things along instead of us always sort of struggling with good tours, etc."