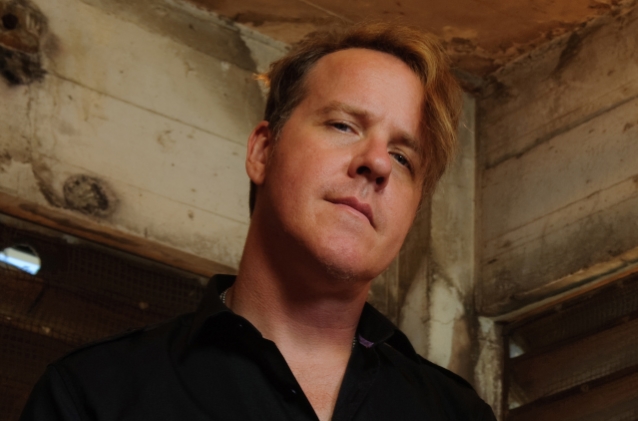 FEAR FACTORY has completed work on its long-awaited new album for a tentative 2019 release.

The effort, which will once again be made available via Nuclear Blast, will mark the Californian band's first collection of new music since 2015's "Genexus" LP.

The news of FEAR FACTORY's studio activity was broken by singer Burton C. Bell during an interview with the M.I.R.P. web site at last month's inaugural Headbangers Con in Portland, Oregon. Asked what projects he is working on at the moment, Burton said (hear audio below beginning at around six-minute mark): "I just had a very successful PledgeMusic campaign with ASCENSION OF THE WATCHERS. We raised the goal. We're getting ready to record our next record in January. We're gonna go to Wales to record it. It's gonna be our second record — the first record we've done in 10 years. So I'm working on that. And John Bechdel [KILLING JOKE, PRONG, FEAR FACTORY, MINISTRY] is part of it. [I'm working with] Jayce Lewis, [who] is an English artist that's very, very talented. He's more on the Gary Numan ilk kind of vibe. He's super talented. I have some other artists available. Mark Thwaite's gonna be involved, who was a part of THE MISSION UK, and he's touring with BAUHAUS right now. I'm gonna have some other people involved, but right now it's just ASCENSION OF THE WATCHERS." He then added: "FEAR FACTORY has a record done. It's delivered to the label. We're just waiting for some legal technicalities [to be sorted out]. And the record'll be out next year."

Back in May 2017, Bell told the Kilpop web site that the positive reaction to "Genexus" has "absolutely" inspired him and his bandmates to try to top it with their upcoming effort. "It was such a great response," he said. "Putting out that record was just positive all the way around, which just makes us drive even further and drive even harder. Now we've been working on a new album. All the new songs, I say, in my opinion, are even stronger than 'Genexus', 'cause it just seems even more tight. We're on a groove, and it's kicking ass."

In 2016, FEAR FACTORY completed a U.S. headlining tour on which it performed its classic second album, "Demanufacture", in its entirety. Asked if playing such an iconic record from beginning to end every night influences the songwriting process for new material, Bell told Kilpop: "Sometimes. It takes you back to your roots, that's for sure… Recapturing your identity — identity within your band is very important. If you have your sound, that's great. But the motivation to move forward and try different things, that is also part of your identity, and you can make it yours as long as it doesn't lose your identity. We can do like some bands have done… Not to name anybody, but metal bands that moved forward and [done] a [very different-sounding] record… Well, FEAR FACTORY has done it once. We have a record called 'Transgression'; it was our rock record. And we totally just, like, alienated [much of our fanbase]. People were, like, 'That was you? That doesn't sound like FEAR FACTORY.' And I'm, like, 'Well, that's what the title 'Transgression' means.' [Laughs]"