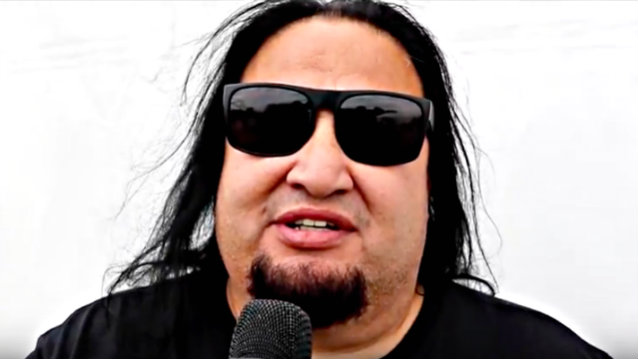 FEAR FACTORY's DINO CAZARES: 'We Put Our Name On The Map Of Metal' With 'Demanufacture' Album

Jägermeister conducted an interview with FEAR FACTORY guitarist Dino Cazares at this year's edition of the Bloodstock Open Air festival, which is being held August 11-14 at Catton Hall in Walton-on-Trent, England. You can now watch the chat below.

Speaking about what it has been like for FEAR FACTORY to perform its 1995 album "Demanufacture" in its entirety on the band's most recent tour, Dino said: "It's kind of cool to go back and revisit an old album. And there's a lot of songs on the record that we've never played live. So to go back and to play all those songs that we've never played, and play them in front of a new generation of fans, it's always really cool. And plus, it was a record that really... we put our name on the map of metal with this record. And it was our breakthrough album. It was our sophomore album. The band got better, the band improved. We progressed, we evolved into better songwriters. We really honed in on the tone and the craft and what sound we were trying to go for as a band FEAR FACTORY."

He continued: "'Demanufacture' is just one of those landmark records, and people wanna hear it — old and new, new fans, old fans, they all wanna hear it. So it's cool to play these songs. I mean, I'm happy. I think this might be the last time we actually do it, because now it's getting into 21 years [laughs], so it's probably cool if we move on to the [20th anniversary of the] next album, which would be 'Obsolete'."

FEAR FACTORY's latest album, "Genexus", was released on August 7, 2015 via Nuclear Blast Entertainment. The follow-up to 2012's "The Industrialist" was co-produced by longtime collaborator Rhys Fulber, along with Cazares and vocalist Burton C. Bell and mixed by Andy Sneap (ARCH ENEMY, TESTAMENT, EXODUS, MACHINE HEAD). Artwork was once again handled by Anthony Clarkson. Drums on "Genexus" were performed by Mike Heller (MALIGNANCY).