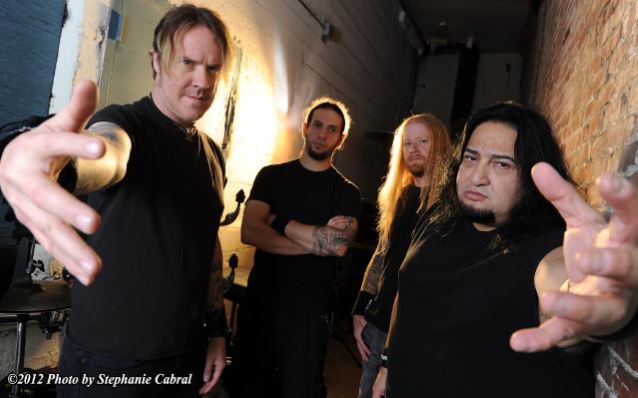 Los Angeles cyber metallers FEAR FACTORY have inked a deal with Nuclear Blast Entertainment for the release of their next studio album, tentatively due in early 2015. The band will enter the studio in October with longtime producer/collaborator Rhys Fulber to begin recording the CD, which will be mixed by acclaimed British producer Andy Sneap (MEGADETH, KILLSWITCH ENGAGE, EXODUS, TESTAMENT, ACCEPT).

"We're doing pre-production right now and we'll be in the studio next month to track the album," FEAR FACTORY guitarist Dino Cazares told Jose Mangin, SiriusXM director of programming and on-air host (Liquid Metal, Ozzy's Boneyard, Octane),on Wednesday (September 10). "We have a lot of songs written and we're finishing the writing, which we're almost done with."

Regarding FEAR FACTORY's decision to sign with Nuclear Blast Entertainment, the U.S. partnership between Nuclear Blast owner Markus Staiger and former Roadrunner Records A&R chief Monte Conner, Cazares said: "Monte was the guy that signed us at Roadrunner back in 1992, and then to come full circle working with him in 2014 feels very good, because, you know, me and Monte were very tight and making all those classic FEAR FACTORY records, we've been through ups and downs together. We saw the best points and the low points of making those records together. It feels good to be back with him, because if anybody understands what we've been through and what we've accomplished, it's him."

"FEAR FACTORY are truly one of the groundbreaking metal bands of our time," says Conner. "On their 1992 debut, 'Soul Of A New Machine', Burton C. Bell was the first singer to introduce the world to the alternating heavy and melodic dual-vocal approach that would go on to become a staple in metal to this very day. The following year, they were the first metal band to enter the industrial/dance remix world with the pioneering 'Fear Is The Mindkiller' EP. And look at the countless metal bands who have since imitated the unique machine-gun-style rhythm section, created when Dino Cazares' staccato riffs locked in perfectly with the syncopated kick drums.

"I am excited to be reunited with this legendary band, and I am certain their Nuclear Blast Entertainment debut will be another FEAR FACTORY classic."

On the topic of the musical direction of FEAR FACTORY's new material, Dino said: "Well, each one of our records are so different from each other. You know, it still sounds like FEAR FACTORY. There's still the killer guitar picking, the killer drum beats, Burt's [C. Bell] beautiful vocals on the top of it, you know, that's all still very much intact, but you always have to try and experiment and push your music to different places, you know what I mean? From [1992's] 'Soul Of A New Machine' to [1995's] 'Demanufacture' is a big jump, and 'Demanufacture' is obviously so different. I would have to say this record would land somewhere between 'Demanufacture' and [1998's] 'Obsolete'."

"[Mike has] been with us for the last two years and he's amazing, he's a great drummer," Dino said. "He's not a really big-name guy, but he just fits well. [And Matt's] doing UNEARTH. He does stuff while we have down time — me and Burton, while we're writing a record and getting that together, [Matt is] doing other projects. He's in UNEARTH, playing with them live right now, but I know their touring cycle is gonna be done soon. So we're gearing up to do some shows; we're doing Knotfest [at the end of October in California]…"

FEAR FACTORY in December 2013 completed touring North America as the support act for MEGADETH. Also appearing on the bill was NONPOINT. 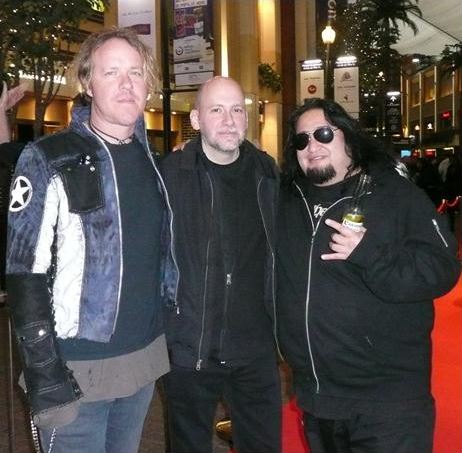