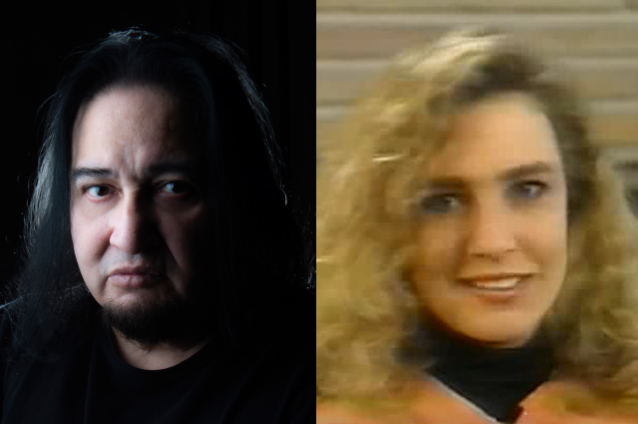 During an appearance on a recent episode of "The Ex-Man" podcast, FEAR FACTORY guitarist Dino Cazares recounted an encounter he had in 1985 or 1986 with former child actress Dana Plato, who played Kimberly Drummond on the 1980s television show "Diff'rent Strokes", while he was working at a sandwich shop in Los Angeles. Dino told podcast host Doc Coyle of BAD WOLVES (as transcribed by BLABBERMOUTH.NET): "The manager who worked [at the shop] was really cool. After we were done cleaning the floors and cleaning up all the sandwich stuff, she would close up shop and we would fucking drink beer. We would hang out. [I was] 18 [or] 19 years old drinking beer. I probably shouldn't say that, but, yeah, I was doing that. And we would always invite some people over. So she had some friends that came over. And this girl showed up. And I was, like, 'Wow. Who's that? That girl looks familiar. She looks familiar.' And I was just talking to her, trying to figure out who she was. And we made kind of a little connection. And then I was, like, 'I don't live too far from here. I don't feel like walking.' I had too much beer. And she was, like, 'I'll give you a ride.' So she gave me a ride to my pad. We were sitting out in her truck; she had a truck. We were sitting out in her truck, and then we started making out. And I was, like, 'Who is that girl? I know her. I know her.' And then she started talking about television; she was talking about a television show. And it was Dana Plato from 'Diff'rent Strokes'. It was her. We had a connection. We had a moment. I didn't see her after that. I never saw her again. It was really cool. It was a cool moment."

Dino added that his brush with Plato will be included in his upcoming book, which he is "slowly" working on.

Plato was reportedly written off "Diff'rent Strokes" in 1984 amid rumors of drug use. A few years later, she bared all for Playboy and began starring in B-movies. She also dabbled in softcore pornography, including a 1997 feature based on her "Diff'rent Strokes" past. In 1991, she was arrested attempting to rob a video store at gunpoint, and the following year she was arrested for forging a Valium prescription.

Plato had a son, Tyler, with her former husband, rock guitarist Lanny Lambert. Eleven years after Plato died, Tyler Lambert committed suicide at age 25. He died from a self-inflicted shotgun wound to the head.

Tyler was just 14 when his mother overdosed on prescription pills (Vanadom and Vicodin).