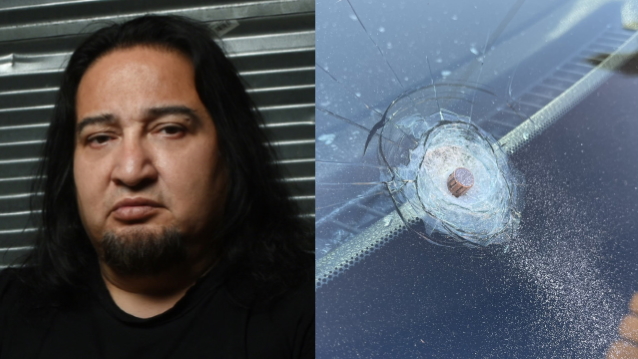 FEAR FACTORY guitarist Dino Cazares says that his vehicle was struck by a bullet earlier today.

The 54-year-old musician, who lives in Los Angeles, took to his Twitter this afternoon to share a photo of his car windshield, with the bullet still stuck in the glass.

He wrote in an accompanying message: "Bullet hole in my windshield today, Los Angeles Police Department asked me if I have any enemy's I said 'yes' and named 3 people. Let's see where this investigation goes. LAPD said it looks like a 45 caliber, it's a big bullet."

When one Twitter user commented that it's "interesting" that the bullet "didn't go all the way through," Cazares responded: "The metal bar that's part of the frame that holds the front dash stopped it from going all the way through".

Last weekend, Dino revealed in an interview that the new FEAR FACTORY album will arrive in the next "two or three months." A single will precede the full-length effort "soon."

In September, singer Burton C. Bellissued a statement officially announcing his departure from FEAR FACTORY, saying that he "cannot align" himself with someone whom he does not trust or respect.

Bell later told Kerrang! magazine that his split with FEAR FACTORY was a long time coming. "It's been on my mind for a while. These lawsuits [over the rights to the FEAR FACTORY name] just drained me. The egos. The greed. Not just from bandmembers, but from the attorneys involved. I just lost my love for it.

Bullet hole in my windshield today, Los Angles Police Department asked me if I have any enemy’s I said “yes” and named 3 people. Let’s see where this investigation goes. LAPD said it looks like a 45 caliber, it’s a big bullet. pic.twitter.com/VArPo8i9XV

The metal bar that’s part of the frame that holds the front dash stopped it from going all the way through https://t.co/GlGF649hex

The bar that’s part of the frame that holds the dashon the inside stopped it from going all the way through https://t.co/GlGF649hex