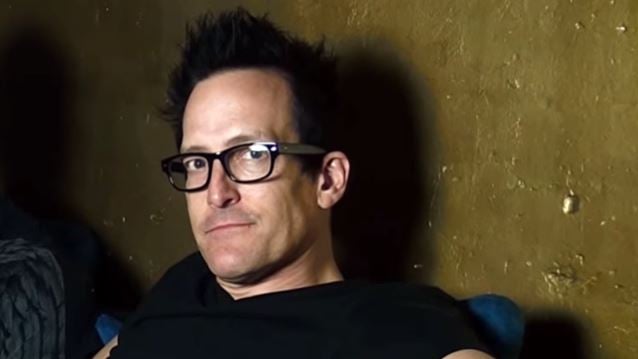 FILTER's RICHARD PATRICK: 'The Biggest Enabler For SCOTT WEILAND Is The Audience'

Patrick, who in 2005 formed a short-lived band called ARMY OF ANYONE with Robert and Dean DeLeo of STONE TEMPLE PILOTS, defended STP's decision to fire Weiland in 2013 and replace him with Bennington.

He told the MusicFrenzy.net web site: "Let's look at AC/DC. Let's look at ALICE IN CHAINS. People die. Look at how graceful the DEFTONES were with the death of Chi [Cheng, bass]. And they're literally saying, 'The reason why we're more prolific is 'cause this new bass player is lighting a fire under our ass and making us work harder.' So you can't throw the baby out with the bathwater. You can't throw the band away because someone just doesn't want to ever, ever be sober. So you're gonna let one man's mental issues…"

He continued: "We all want Scott to be Scott, but Scott's not even really Scott. I love him, but he's transformed into a very different person. Bless his heart, and I hope he gets sober and everything. But I was in ARMY OF ANYONE for years working on that record and producing it, and I heard a lot of stuff [about what it was like being in a band with Scott].

Patrick added: "I don't work with people that are using. I fire people all the time, because it's, like, 'Hey, dude, I know an addict when I see it. And I'm not gonna have a debate with you about whether you're an addict or not. Only you know you're an addict, and I just don't wanna be around it.' And, you know, thankfully, I'm the frontman and I'm the guy that writes a lot of the music and I'm the guy that sings, so I can have that kind of power.

"It's sad that three guys have to sit around and wait for someone to show up to a rehearsal. And they've been there for two weeks working, and the singer hasn't even shown up. And you get onstage and the guy doesn't even know how to sing his own songs. And it's pathetic. And it's sad for everybody."

According to Patrick, some of the STONE TEMPLE PILOTS fans are at least partly to blame for Weiland's pattern of erratic behavior. He said: "The amount of shit that [the fans] give the band for trying to have a normal life [with a new singer]… When the crowd, especially [for] STP, is the biggest enabler for Scott — when they're shitting all over Chester, when they're shitting all over me for being in ARMY OF ANYONE, when they're shitting all over these people that try and just…. You know, the band — Robert, Dean... — and [the fans are] just sticking up for Scott, and they have no idea of [what is going on] behind the scenes. And it's actually… They're pushing him into his death, because they're making him believe that, 'Whatever I did is acceptable. And I can be as high as I want. And I can do as much drugs as I want.'"

He continued: "[Some STP fans say], 'He's a badass rock and roll star. You can't have STP without Scott Weiland.' Okay, well, you're gonna get what you want — he'll be a rock-star legend that died in a hotel room with a needle sticking out of his arm, and it will not be a cool thing, and it will be sad, and his kids will be traumatized."

Patrick added: "It's bizarre that the biggest enabler for Scott is the audience… at least [as] of a couple of years ago. I don't know what it's like now."

STONE TEMPLE PILOTS began working with Bennington in May 2013 after firing Weiland three months earlier. So far it has released one EP called "High Rise" with Bennington on vocals.