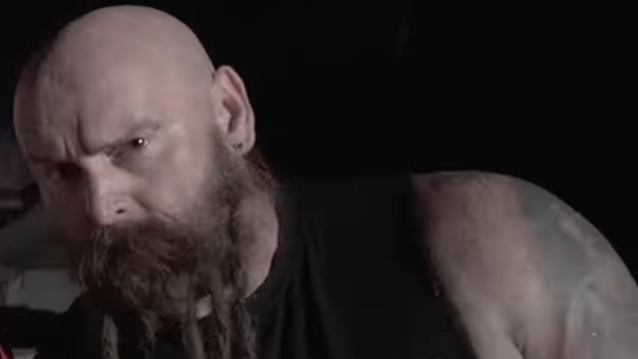 FIVE FINGER DEATH PUNCH bassist Chris Kael has called out celebrities who threaten to leave America due to tensions over politics, ideology, economics and so many other forces fraying the fabric of our nation.

The 48-year-old bassist made his comments just days after GREEN DAY's Billie Joe Armstrong said that he was "renouncing" his American citizenship following the Supreme Court's decision to repeal Roe v. Wade.

During GREEN DAY's concert on Friday (June 24) in London, United Kingdom, Armstrong told the audience: "Fuck America. I'm fucking renouncing my citizenship. I'm fucking coming here. There's just too much fucking stupid in the world to go back to that miserable fucking excuse for a country."

He added: "Oh, I'm not kidding. You’re going to get a lot of me in the coming days."

Earlier today (Monday, June 27),Kael took to his Twitter to write: "No one cares about anything enough to pack up and move out of the country. It's easy to say onstage, on TV and on social media; but, when's the last time you actually packed your bags for anything longer than a brief vacation and a quick return home? Stop bullshittin'. #USA".

Several years ago, a number of artists and celebrities — including SLIPKNOT frontman Corey Taylor and LAMB OF GOD singer Randy Blythe — vowed to flee the country if Donald Trump won over Democratic nominee Hillary Clinton in the 2016 U.S. presidential election.

Some A-listers said they would go to Canada, various locations in Europe, South Africa, and even Jupiter.

Despite their bold statements, most celebrities remained in the U.S. post 2016 election.

In December 2015, Blythe called Trump " a purposeful clown' and "a tool" in an interview with Metal Insider, adding that "if he is the president, I am leaving America 'till he's gone."

Taylor had also been vocal about his distaste for Trump, telling a Des Moines, Iowa radio in a 2015 interview that he would "emigrate" if Trump became president.

In February 2020, SUICIDE SILENCE guitarist Mark Heylmun told Australia's "Scars And Guitars" podcast that America didn't feel like one country to him. "It feels like there's such a divide in the kinds of people that we have," he said. "And I don't wanna bash the Bible Belt, or the middle of America, but the difference between them and the people on the coasts — that's where all the blue is, and there's a massive divide, and that's where Trump wins. It's just a different spot. I don't know how else to put it. It feels different. Same with Texas. I feel like Texas could be its own freakin' country."

Heylmun also ripped America's 45th president, saying: "Well, anybody is better than Trump. That's pretty much how it's gonna go. And if Trump wins again, I very well could just leave America."

In a 2016 interview, METALLICA's Lars Ulrich said that he would consider moving back to his native Denmark if Trump were elected president.

"I am a hundred percent Danish citizen. I pay taxes in the U.S.A., but I can't vote in America," Lars said at the time. "Yes, certainly sometimes I think about moving home to Denmark… If Trump becomes President and everything goes to shit, I might make my way to the airport and ask if I can get back in again."

In a September 2020 interview with U.K.'s Sky News, Ulrich was asked if the fact that he had remained in the U.S. meant that he was now a Trump supporter and that he would vote for him in that year's president election. The drummer replied: "I would say that that would be an exaggeration of the truth. First of all, I'm a Danish citizen, so I can't vote in the United States. Number two, I was just seeing if people were paying attention, which, obviously, they were four years ago, since this quote has come back to haunt me in, basically, every interview I've done in the last month. So, let's just leave it at that I'm a Danish citizen, I can't vote, but I am happy to live in the United States. And I think that's enough on that."

Pressed about whom he would vote for if he was an American citizen, Ulrich said: "I think people that know me well, and fans out there, can probably put two and two together."

No one cares about anything enough to pack up and move out of the country. It’s easy to say onstage, on TV and on social media; but, when’s the last time you actually packed your bags for anything longer than a brief vacation and a quick return home? Stop bullshittin’. #USA

I’m SO grateful that I’m into ladies who are into not-getting-pregnant types of banging. It’s that or #BlueStateBanging for me! #RoeVsWade