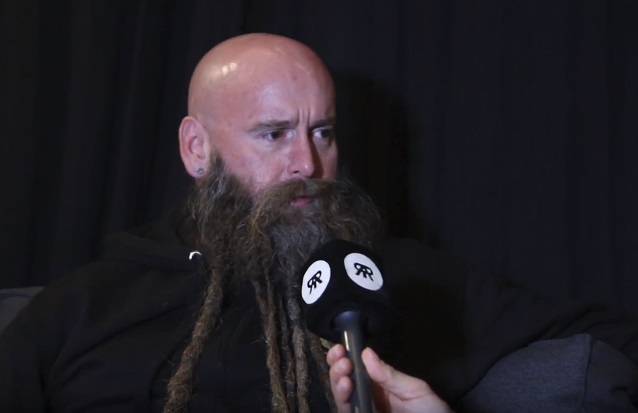 FIVE FINGER DEATH PUNCH bassist Chris Kael has defended A PERFECT CIRCLE's strict no-cell-phone policy at all concerts, saying that the Maynard James Keenan-fronted outfit regularly performs previously unreleased material that should not be experienced for the first time through a low-quality YouTube recording.

It was reported in early November that more than 60 concertgoers were ejected from an APC show for taking photos in violation of the band's stated policy. A PERFECT CIRCLE guitarist Billy Howerdel later said that it's "rude" for anyone to be "sticking your phone up in front of the face of the person behind you."

Speaking to Radio Rock's Jussi 69 (who also plays drums in the Finnish rock outfit THE 69 EYES),Kael was asked how he feels when he looks out to the crowd of 5,000 people at a FIVE FINGER DEATH PUNCH concert and sees most of them holding their cell phones and filming the show. "You said the magic word: '5,000 people'," Kael responded. "I don't care how they appreciate the show, as long as those people are there to have their own experience, do whatever.

"The one thing recently I saw, A PERFECT CIRCLE had kicked some people out for using their cell phones," he continued. "If it says on the wall that the artist doesn't want you to use the cell phone on there… A lot of the reason that he's [Maynard James Keenan] able to do what he does is he comes out and will play brand new songs that have not been released yet. As an artist, I know from our standpoint, we don't do anything new on stage that hasn't been released yet. The reason being, we're cool with cell phones, but you also don't want the fans' first experience of a brand new song to be on an iPhone with crap, garbage sound [of a song] that they never heard before. Maybe you were having a bad night that night, a terrible mix or whatever for whatever reason, and that's the first experience [of the new song]. So I get him having his own thing, and I think that if they bring cell phones to those [shows], that's gonna end up screwing those guys, 'cause he's gonna be, like, 'Okay, I was trying to give you something special by allowing you to hear our brand new song, but if you wanna record it, sorry, that's now taken away.'"

Kael does, however, admit to having recorded cell-phone footage of certain concerts in the past. "There'll be times when a friend or whatever, if I'm at a show and I know their favorite song, I'll film that song for 'em, but it's, like, I'm not gonna go home and watch it," he said. "Does anybody ever go home and watch the full thing? No way! Absolutely not."

Keenan has also enacted a strict ban on photos with his other groups, TOOL and PUSCIFER, but it got renewed scrutiny after the ejections that took place at A PERFECT CIRCLE's show on November 4 in Reading, Pennsylvania.