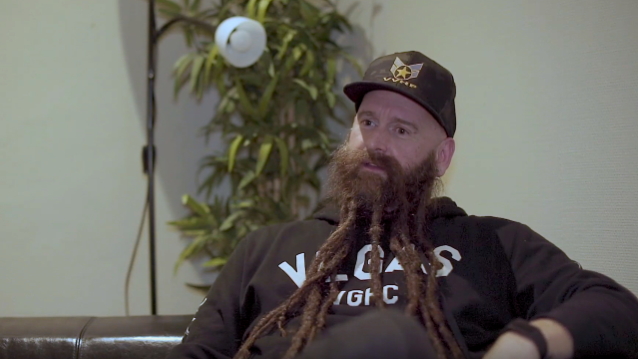 FIVE FINGER DEATH PUNCH Bassist On Touring With MEGADETH: 'It's Definitely Lit A Fire Under Our Rear Ends'

Prior to FIVE FINGER DEATH PUNCH's January 23 concert in Oslo, Norway, bassist Chris Kael spoke with Eternal Terror Live. The full conversation can be seen below. A few excerpts follow (as transcribed by BLABBERMOUTH.NET).

Chris: "We were trying to figure out a way to tie in the number eight with it being our eighth release now. I think with all the things that have happened to us individually over the last two years — last three years, probably — it's gotten us to this point. I think all the difficulties that we were going through have led us here. It's kind of our fate to have made it through that and had to go through all that garbage that we went through to really appreciate where we're at now. That's where that album title comes from."

On touring Europe with MEGADETH:

Chris: "I was on vacation in The Phillipines when I got the call from Zoltan [Bathory, guitar]. I know that we were talking about doing some things, and it all came together while I was on vacation. Zoltan sent me a text — he's like, 'Hey, man. We're going over to Europe with MEGADETH.' I'm like, 'That's going to be awesome. We'll be able to, like, get off stage [and] I'll be able to watch MEGADETH every day, kind of relax and hang out.' He goes, 'No, no, no. We're going to be taking MEGADETH with us.' I'm like, 'MEGADETH? One of the 'Big Four'? What has happened to my life to put me here?' I'm absolutely grateful to be able to get up there and share the stage with absolute legends. It's definitely lit a fire under our rear ends. If you're going on after MEGADETH, you've got to bring your A-game. It's been good for us. We feel like we do really well [live], but when you're going on after MEGADETH, let the fire go."

On the platform that FIVE FINGER DEATH PUNCH provides:

Chris: "I'm very grateful that I have an opportunity to be in a band that touches people the way that we do and has that connection. It's something that's kind of happened naturally. I think people can see the genuine in us, and I think that kind of resonates to everybody. With DEATH PUNCH, you don't so much as just kind of listen to it — the fans, it's like a family. You're really part of a movement and part of that family. Growing up, I enjoyed listening to KISS. I think that we have elements in the same sense where KISS had four very different personalities within the band. You can love KISS, but you always had your own favorite member. I think that with DEATH PUNCH, we have five very distinct personalities that work well within the framework of the group. Each individual personality, as a fan you can find the one that you identify with most because they are so different. I think that works well with us as far as [the] connection goes... I'm all about the butterfly effect. You never know how one little interaction's going to spread. I love those moments. To be in a band with the platform and the audience that we have to be able to do those little things and kind of have that positivity spread throughout, that's one of the best things about being in this band."

On raising funds for veterans:

Chris: "I have a vest that I wear on stage now. Out of that, my part of the proceeds goes to the Vegas Veterans Hockey Foundation. It's a foundation in [Las] Vegas that puts together veterans through the local hockey [league]. A lot of the times when you come home and you don't have that going on anymore, you kind of lose that group interaction, so it gets them back in a team-building effort. A lot of people come back suffering from PTSD and depression and whatnot, and getting all those people together, kind of like on a mission, I guess — you're trying to win the games and whatnot — just builds team-building. We've got a big platform, and the military, the police and first-responders, they've all got the hard jobs. Our job, I basically get up there and shake my beard... Any time I get a chance to shine a light on some of the charitable causes that we believe in and back and support, I'm going to use this platform to do better."

Chris: "I went through a certain time where I wasn't dealing with things very well. I'm two years sober coming February 3, so within the last two years, you can hear it in my voice and the things I talk about now — a place of gratitude and thankfulness and awareness. I'm very present at the moment. I've found an appreciation for everything, having gone through all the work that I've had to go through and gotten rid of the drugs and alcohol. I think professionally, personally, as a band, Ivan [Moody, vocals] is also sober as well, so to have those elements of addiction and substances and everything else that comes along with that. Right now, we're all getting along. Even the other day, we had a terrible soundcheck. Ear monitors weren't working well for us; the mix was terrible. Just a terrible afternoon. Two and a half years ago, when those elements were still within the band, it could have very easily blown up into some of the stage performances [suffering]. Luckily, we don't allow those little flare-ups turn into infernos anymore. I think that's the biggest change — being clear and focused. We have a new record coming out, and you can definitely hear the clarity and the presence of mind, particularly in the level of introspection coming out of Ivan on this record."

On the perks of success:

Chris: "The schedule that we have right now has been awesome. We used to do basically three shows on, one day off, two shows on, one day off. I know I sound like I'm bitching, and I realize it's a stupid fucking problem and my life is not hard — it's really not — but we find that when we do no more than two in a row, Ivan and my voice — because I do a lot of backup vocals — our voices hold up better rather than trying to do three days in a row. Three days is starting to push it a little bit, particularly with the aggressive vocal approach that we have. We try to do that as much as possible. We're lucky enough where things are good and we're playing larger places now, so you don't have to hammer out quite so many all the time. You can kind of spread things out. Also, when you spread those things out, it gives us a chance to go see the cities that we're in, and you have the opportunity to not only be Chris Kael the band guy, but while you're out traveling around, you can be Chris Kael the human and go see things and kind of be part of the world again. I like this schedule a whole lot better — particularly in sobriety. It gives you a chance to get back to a level of appreciation about everything, and when you're able to travel the world like we're able to, you really get a sense of how small the world is and how alike all of us are."