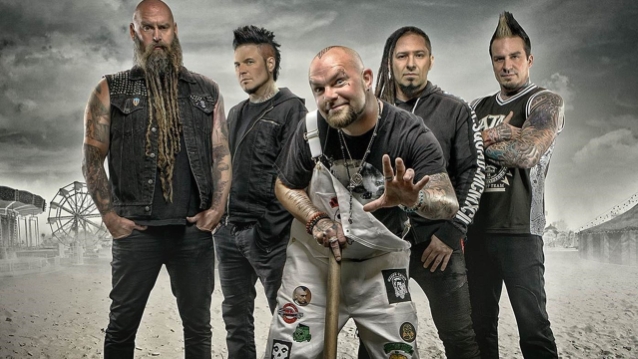 FIVE FINGER DEATH PUNCH frontman Ivan Moody was recently interviewed by the Reno radio station Rock 104.5. The singer, who has been open about his struggles with alcohol addiction, was asked what he does to "stay mentally in check" while on the road. He responded: "I'm sure you've seen, I just started my own Instagram page finally. I'm really trying to get out there and give back and just be involved with society in general instead of being so recluse and so stuck in my own little bubble. Which is really what it comes down to. I get to be this monster, and everybody expects me to be that every day, and it's not that way.

"When I wrote a lot of these songs [on FIVE FINGER DEATH PUNCH's latest album, 'And Justice For None'], I was in weird places, of course, and in different elements of my own life," he continued. "So I'm not that person 24 hours a day, and that one and a half hour of my life every afternoon, I get to get up there and unleash the fury, so to speak, but at the end of the day, I put that back in the cage, and that's what the hardest part for me was — morphing and understanding that it's part of life, but it doesn't have to be all consuming.

'So there's really no regimen for me. It's just a matter of… Some days I work out, some days I walk around the city. I don't know… It just depends on the mood, really. I just try to keep myself positive and really active."

Back in May, Moody told the Green Bay radio station Razor 94.7 that he was more than three months sober and revealed that he nearly died due to an alcohol-related seizure and woke up surrounded by EMTs and his daughter holding him while crying.

Moody admitted that he went to rehab five times before the last time finally stuck, saying: " I knew I was done during my detox. It took me seven and a half days just to detox. I couldn't walk, I couldn't go to the bathroom by myself, I couldn't smoke a cigarette. I had a staff member actually sleep in the room with me for the first 38 hours, just to make sure that I didn't go under."

The singer said that he "didn't want to come out of it" the last time he went into rehab, but couldn't explain why he felt what way. "I don't know, I really don't," he said. "There was so many things — minor things — in my life that just accumulated into this one big fucking thing. I truly don't know. I mean, think about it: I've got everything I've ever hoped for. I've got beautiful children. I'm taking care of my mother; I set her up. I've got a niece and a nephew. My brother's getting married. I've got nice cars. I've got a beautiful house. I love my dog. Imagine if you've got everything you've ever wanted — everything — and then what? What do you do?" he asked rhetorically.

Moody said that he worked on fixing his "spirit" this time, adding: "I just don't want my legacy to be [dying from substance abuse]. Chester [Bennington] and Chris [Cornell] and Scott [Weiland] and Layne [Staley]… I listen to a LINKIN PARK song now and I can hear [Chester] crying for help. That's the difference. Why did it take us so long to hear that?

"I want people to hear my lyrics and my melodies and say, 'That dude's in pain.' Or, 'That guy's victorious over something. He overcame that substance, or just life in general.' I just wanna give hope back," he said.

"And Justice For None" came out in May.