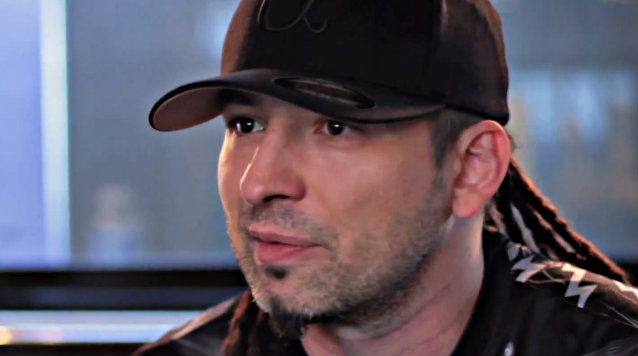 Loud: FIVE FINGER DEATH PUNCH are a unique proposition within the music industry, because it's rare these days for hard rock or metal acts to attain a status such as a gold record, but you're still able to command that degree of devotion.

Zoltan: Yeah, to tell you the truth, that's actually a miracle. That's exactly the problem everybody is having. The downloading and the whole world's changed, it's really a bad thing, the recording industry. And I guess it's pretty much, it's a double-edged sword, actually. Because, in one way if you think about it, it forces bands to do better. Because what's going to happen, if you make a new record, right, and you have maybe two or three songs on the record that are good, and the rest of the record may be just kind of filler, what's going to happen is people download those three songs and that's it. So from that standpoint, the bands just have to work harder, everybody just has to make sure that their record is bulletproof, so it makes sense for the fans to buy it, the whole record. So it's kind of forcing the bands to do better, to work harder. On the other hand, sub-genres or bands that are extreme metal, bands that generally don't have much of a fan base to begin with, because they are somewhat unique, those guys are going to have a really difficult time because simply, sooner or later they can't afford touring, the record sales (have) completely gone away and it puts a really serious strain on the industry. So I guess we're in a lucky position that our fans are really aware of this. It's a really interesting thing; every time we put out a record, we get a lot of pictures on our social media from our fans, but they're showing us pictures with them holding our record. So it seems like they understand that they buy the record because they support the band. I think that's also changed now. The fans understand this picture; the fans understand that buying the record -because they can download it — is almost like you really are pledging your alliance. Buying the record is actually a gesture from the fans, that "I pledge my alliance to this band. I love this band, and I will support them." I think they're conscious of it, and think that's actually what's happening to us.

Loud: What do you attribute much of that success to though, that fans of different types of music all seem to gravitate towards FIVE FINGER DEATH PUNCH? Is it simply that you've struck a chord with metal fans through your harder-edged material, while also gaining fans via the ballads that gain regular rock radio airplay?

Zoltan: I think it's because we are sort of, we basically play the kind of music we want to listen to. It seems like we share a pretty common, sort of, belief with a lot of people. Every band member in this band is into melodic, hard rock/heavy metal. So, basically, what's going to happen is we're going to play the music that we like, and this is kind of melodic, hard rock/heavy metal… There is still a lot of interest; there are a lot of people who are into that. If you go to, let's say, poppier, like pop bands, you immediately lose the rock fans. If you go heavier, and the music starts to become extreme, which doesn't have that kind of audience. So, I think, stylistically, we are somewhere right in the middle, you know? We have heavy songs, but also we have songs that can get on the radio. Some of our songs slip by the major media's radar, or major media's censorship, so we can get into major media, we can get onto major radio stations. We can get these things because we have the songs to do that. So that's one of the things. One of the other things is we toured a lot, and we have a very close relationship with the fans, because we handle our own social media, we answer e-mails. We all run our own profiles and talk to people. It's a down-to-earth band, and I think that's another thing. And third would be the lyrics. We don't write fictitious stuff; the lyrics are all experiences and everyday things, you know? Some bands sing about Viking warriors and dragons and all that, which also is fine, but it's never going to connect with the audience, because it's irrelevant to them, you know, to most people. So when your lyrics also connect, it's everyday stuff; the things that piss you off, the things that make you happy, the things that you struggle with, and that will definitely strike a chord with a lot of people. I think these are the three things that, accessible music… We don't play the rock-star card. We talk to everyone, hang out with the fans; do our own media, and lyrically we connect. I think these are the elements which makes the band popular.

Loud: You have been blasted by certain critics for your lyrics, especially some of the military-themed sentiments. Do you just shrug off that kind of criticism?

Zoltan: Well, this is the thing about lyrics. Going back to the previous question, how do you connect with people? When you're in a rock band, let's say, I can phrase a sentence for you, I can phrase it in Shakespearean English; you know what I mean? Which will fly over most people's heads; it's just not how we talk. Especially when you're a rock band, there's a lot of rock bands are generally more aggressive… There's some kind of harder lyrical themes. And that kind of language, that kind of theme actually requires it to be a little bit more direct. So you're going to have much more direct, maybe even simpler lyrics. Because if you want to say to somebody, "Hey, man, get the fuck out of my way," then that's what you're gonna say. You're gonna say, "Get the fuck out of my way." You're not going to go into that (adopts mock English accent),"Oh, sir, could you please?" [laughs] That just doesn't work with rock music audiences. So that's one of the things we get a lot of flak for, because they say like, okay, the lyrics are simplistic. But at the same time, that's exactly why a lot of people love the lyrics in the band. So it's kind of divisive… The rawness of the lyrics, a lot of people connect to that and it isn't for some people, but that's just what it is, you can't please everybody. And for the military stuff and basically our own worldviews, people would have to know us and understand where we came from. Every member of this band was a hard-working; no middle-class guys, nobody had a silver spoon in their mouth. So you really have to fight for it. I came from a fucking almost third-world country, like a communist country, with a passport, not speaking a word of English, and a guitar on my back, to America. I lived in the fucking ghetto, I went through shit that people can't even imagine, you know? That's our upbringing, that's how we got here, and it's reflected in the lyrics. And then basically the lyrics is that, I'll stand on my own feet and I'll fight until my last breath for whatever thing I believe in. So that often connects with a lot of military guys, because they have similar mentalities, you know what I mean? So for me, it's, that's who we are. I go to the gym, I fight professionally. I'm a jiu-jitsu competitor; these are the things I do. I do different martial arts. I'm a hand-to-hand combat instructor for the Army. These are the things that excite me and that I do. So that's what I'm going to talk about, that's what we do. I can't pretend to be something I'm not. And I understand exactly the question that you're asking, it does divide the audience. But I'm pretty sure there's a band for people who are into butterflies, you know what I mean? I'm sure you can find a band that sings about butterflies. [laughs] So pretty much for me, this is who we are, this is what we do and this is what we love. And there are, thank God, plenty of people who are similar to us.