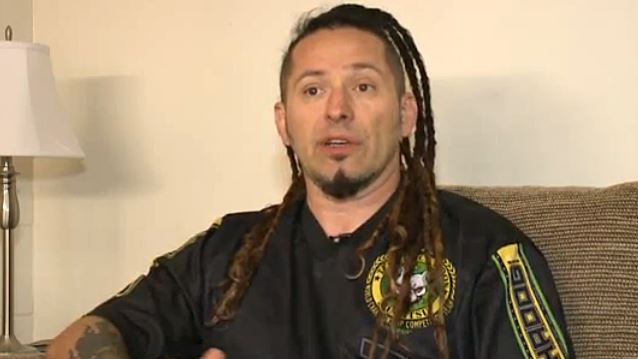 In a recent interview with West Michigan's FOX 17, FIVE FINGER DEATH PUNCH guitarist Zoltan Bathory spoke about the lyrical themes covered on the band's latest album, "The Wrong Side Of Heaven And The Righteous Side Of Hell", which was released in two parts last year, with the first arriving in July 2013 and the second following last November.

"Since there is a global connection with the Internet and all the social media, everybody has an opinion," Zoltan said (see video below). "And people take that stuff way too seriously, of what that opinion is. Everything you say, everything you think is just a point of view. The record revolves around that."

Asked how FIVE FINGER is going about following up last year's "The Wrong Side Of Heaven And The Righteous Side Of Hell" albums, Spencer told Live Metal: "Well, now we're gonna do three records! [laughs] No. We're just gonna do what we do. We always write what we feel at the time. You can't get caught up in trying to worry about, is this gonna sell more or is this gonna be better? I've certainly gone through that already. After 'War Is The Answer', following up with 'American Capitalist', there was a lot of pressure. It was self-induced more than anything, and I realized it's a waste of energy to worry about that stuff. Just write the best songs you can that are as honest as possible and that you like to listen to, and the rest will take care of itself. That's just kind of how we approach it."