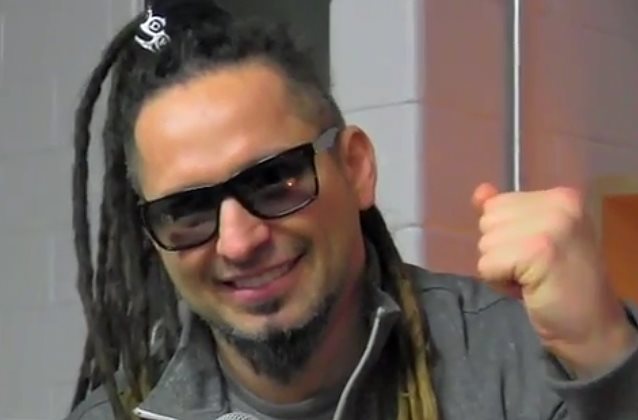 FIVE FINGER DEATH PUNCH guitarist Zoltan Bathory was interviewed by Terrie Carr for the latest edition of "Box Of Rock" on WDHA-FM 105.5 FM, the rock music station licensed to Dover and Morristown, New Jersey. You can now watch the chat below.

Speaking about FIVE FINGER DEATH PUNCH's ongoing campaign to bring awareness and help to our veterans suffering from Post Traumatic Stress Disorder (PTSD) and other post-war struggles, Zoltan said: "Well, I will try to sum it up in a nutshell, because it is a long history, the way I grew up. I grew up in a communist country, and I came to a country that had a constitution worth to defend. I understand what it means living without a constitution, I understand what it is [like] living under an oppressive government, I understand what it is to be without freedom of speech. So when I came here, to me, the Statue Of Liberty actually meant something. And I came here with the full knowledge of what America was, what it was founded on. And so I recognize the police, the fire department, the military and all the people who are involved to keep this democracy afloat. And I came here knowing this, fully knowing this and understanding this, and I was sworn in here as a proud citizen. And it meant something to me that I will defend this constitution from enemies domestic and foreign. These words actually meant something to me, and these are the guys. So right now I made that oath and I'm upholding that oath. Obviously, I'm not serving as a service member in the military, but I'm doing my part."

FIVE FINGER DEATH PUNCH and SHINEDOWN partnered to donate $1 from each ticket sold on their fall 2016 tour to four hand-picked charitable organizations close to their hearts. FIVE FINGER DEATH PUNCH chose the Badge of Honor Memorial Foundation, whose mission it is to assist the survivors and departments of officers who have been killed in the line of duty to obtain all the statutory benefits that may be available to them and to train law enforcement departments on casualty planning, preparing them in advance of a line-of-duty death.

Zoltan told WDHA-FM: "We could go all the way down in the philosophy of what that really means and why [the use of military force] is necessary. At the same time, I'm somewhat of a Buddhist and I have a certain set of beliefs and so therefore you need these guys. They do a job that you and I don't want to do, necessarily, or most of the population don't want to do, so I think they deserve respect. And I'm not talking about the political aspect; I'm talking about the service members, the individuals who made that oath and will not run away and [who will] defend this country and what it stands for and its interests."

FIVE FINGER DEATH PUNCH recently completed work on its new album, due later in the year.

The band recently signed a North American deal with Rise Records. FIVE FINGER DEATH PUNCH's first album with Rise, the BMG-owned rock label, will be released following the completion of the group's obligation to its current label, Prospect Park.