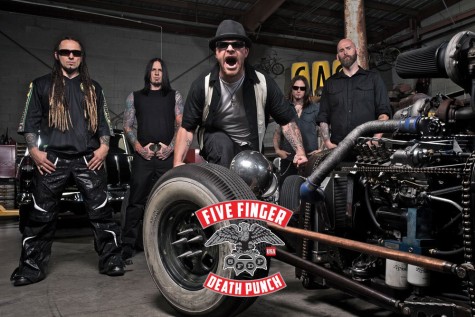 FIVE FINGER DEATH PUNCH recently hit No. 1 at the Active Rock format with the band's latest single "Coming Down". The track was the tenth consecutive Top 10 hit, cementing the act's position as one of the most relevant at the format.

Going back to "The Bleeding" in the spring of 2008, FIVE FINGER DEATH PUNCH is one of the most heavily played bands at rock radio, as "Never Enough", "Stranger Than Fiction", "Hard To See", "Walk Away", "Bad Company", "Far From Home", "Under And Over It", and most recently "Remember Everything", each has become an anthem in its own right. The band's current album, "American Capitalist", continues to sell extremely well, with 452,000 copies sold since its debut at No. 3 on The Billboard 200 chart last October. The imminent gold certification of the band's third record and cumulative track downloads exceeding one million sold proves that there are few acts more successful than FIVE FINGER DEATH PUNCH.