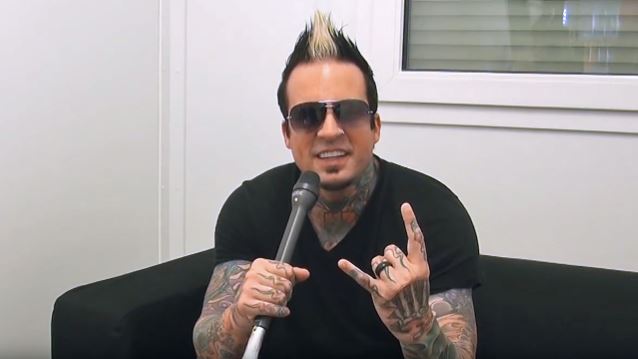 FIVE FINGER DEATH PUNCH drummer Jeremy Spencer will make his feature-film debut in "Murder Hill", a horror movie based on true events. The film, which also stars actor Tom Proctor from "Guardians Of The Galaxy" and "Birth Of A Nation", was written by Mark and Anna Casadei, who are also producing through their company Awesome Monkey Productions.

Shot on location in Rome, New York, "Murder Hill" is loosely based on a combination of different murders that have taken place in Rome since the 1970s.

"I've got to admit, I had a fanboy moment! I have always admired his skill on a drum set, and his persona on stage is pure amazing to watch," said Mark about Jeremy's involvement with the film. No stranger to music themselves, Mark and his wife Anna are both musicians and huge fans of FIVE FINGER DEATH PUNCH — so much so, that Anna wrote most of the script while listening to their albums. Mark said: "I would often come home and hear her jamming to the tunes of FIVE FINGER DEATH PUNCH while the laptop keyboard smoked away to the beat! It was kind of cool to see."

Jeremy was introduced to the producers through a mutual friend, and they hit it off since day one. The drummer said: "I was hooked on horror since I was six when I walked in on my parents watching 'The Exorcist', just as Regan's head was swiveling. I've been hooked from that point on." Jeremy is not only stoked to work with Proctor, but he is excited to collaborate with the production team as a whole. "This is going to be a lot of fun, and I know our FIVE FINGER DEATH PUNCH fans will dig it!" said Jeremy.

Anna loved the idea of Jeremy coming on board, and she specifically wrote a part for him in the script that mirrors his on-stage bad-ass persona. She stated: "If you know his music, his style of playing, and his stage presence, you get a feel how that will relate on-screen."

The producers are not stopping with Jeremy. They want to feature the music of FIVE FINGER DEATH PUNCH in the film. Mark said: "This is a great opportunity to showcase their music and and get the feel of the film from that music."

Actor Basil Hoffman from "The Artist" and "Close Encounters Of Third Kind" is set to co-star in the film, along with Marilyn Ghigliotti from "Clerks" and "Lake Eerie". The production team includes director Lance Kawas.