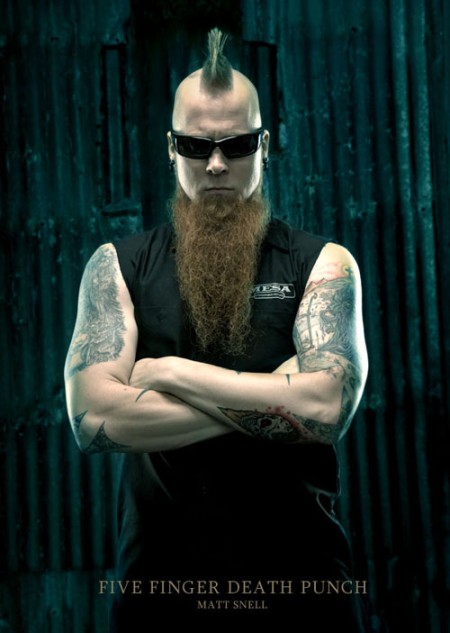 According to The Pulse Of Radio, FIVE FINGER DEATH PUNCH has given a statement to "Harddrive Radio" about the departure of bassist Matt Snell at the end of last year. Guitarist Zoltan Bathory confirmed that Snell was let go back in December, but also told "Harddrive Radio" why it wasn't made official until now and why he can't speak about the reason for Snell's exit. "You know, we want to concentrate on our record, and that's the most important right now, the third record, so that's why it wasn't really like publicly available information," he said. "As for reasons, we have contracts between each other and the contracts that we have between each other always protect the band members. Like we have a contract with Matt, you know. Word by word the contract says I can't tell you anything that would hurt his career if he goes any further."

In a separate statement to Gun Shy Assassin, Bathory had the following to say about Snell's exit: "We let him go a long time ago… way back in December, actually. We have been recording our third album since January and as you can imagine the band is in lockdown mode in the studio 24/7 writing and recording. No time for extracurricular distractions so we decided to keep it under wraps for now.

"This kind of stuff usually becomes a damn circus which we really didn't want to be bothered with during the recording process. Somebody leaked it against the band's wishes, [and] that's why all kind of semi-retarded rumors are spreading, I guess.

"I can't follow this shit, man — we have better things to do and especially right now we are busy as hell… but you know how this works; everyone can run their mouth on the Internet and state whatever they want you to believe. In this case, most stuff you'll find is probably false since we didn't make any sort of public statement, so whatever you hear is only a speculation.

"To put this to sleep for now, I'll answer this: yes, he was fired… but there's nothing else to announce, really. We'll deal with replacing him when we finish the record and have time to focus on that. As for the sound of the band, and the recording process, etc. — Matt wasn't a writing member so it doesn't change anything. The process is the same as it always was."

A short audio clip of Bathory talking about Matt's split with FIVE FINGER DEATH PUNCH can be found at this location (Real Media). It can also be streamed below.

FIVE FINGER DEATH PUNCH is in Las Vegas right now, recording the follow-up to 2009's "War Is The Answer".

Although flyers announcing an open call for bass players were posted at the Musicians Institute in Los Angeles, a management rep for FIVE FINGER DEATH PUNCH insisted to BLABBERMOUTH.NET on Monday (April 25) that the flyers were not approved by the band and had been removed, although auditions were held.

The new FIVE FINGER DEATH PUNCH album is expected out in late summer or early fall.