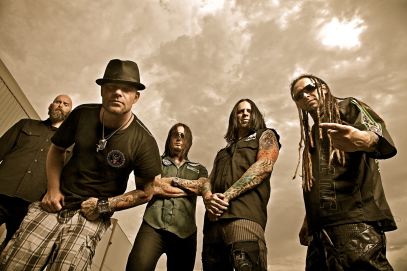 "Remember Everything", the new video from Las Vegas-based metallers FIVE FINGER DEATH PUNCH, can be seen below. The track comes off the band's third album, "American Capitalist", which debuted at No. 3 on The Billboard 200 chart, selling 91,000 copies in its first week of release. Both the chart and sales numbers were career highs for the group.

FIVE FINGER DEATH PUNCH fans are able to get the brand new cover art for "American Capitalist". It features an illustration of the group's ubiquitous "mascot," Knucklehead, over the backdrop of Times Square in New York City.

The new Knucklehead illustration only replaces the regular edition album version of "American Capitalist", while the deluxe edition artwork remains the same.

"American Capitalist" was released as a standard CD, and a limited-edition deluxe CD format complete with special packaging plus second disc containing a number of exclusive remixes, including one for "Under And Over It". Meanwhile, the iTunes version carries the bonus track "The Tragic Truth".