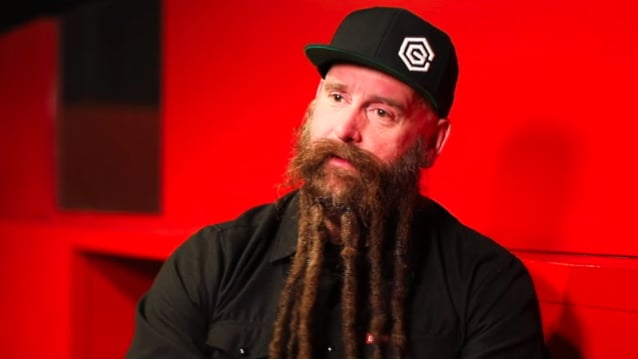 In a new interview with France's Heavy1, FIVE FINGER DEATH PUNCH bassist Chris Kael was asked if he feels The Recording Academy is disrespecting the heavy metal genre by not including it in the televised portion of the Grammy Awards. He responded (see video below): "I don't give a damn about it, honestly. I really don't. Metal has always kind of been on the outside. There was the metal heyday when METALLICA was performing on the Grammys and whatnot, but we've always kind of existed on the outside of the accepted. And I prefer to just keep it that way."

He continued: "Any of us that are doing this metal thing, we definitely don't write to get Grammys; it's just something that kind of happens with the people. I mean, I'm happy as fuck that my buddies from KILLSWITCH ENGAGE were out there. Mike D'Antonio [KILLSWITCH bassist], he sent me a message while I was out here [on tour in Europe], and it's, like, 'Are you in L.A. tonight?' I was, like, 'We don't get nominated for Grammys, man. That's you guys.' [Laughs] So, to have our friends out there doing it, that's cool with us. But we're not concerned about awards. Our award is every day getting out, playing in front of these people and getting the feedback from the fans as far as how these songs are touching people's lives. We don't give a damn about an award. We just wanna reach lives and bring as much good and positivity as we can."

Kael's bandmate Zoltan Bathory recently decribed FIVE FINGER DEATH PUNCH as "the biggest unknown band in the world." Addressing how hard rock and metal are simply not in the spotlight right now, the guitarist told Billboard.com: "This is just not the genre that is getting the TV coverage and getting the mainstream coverage. I think it's simply attributable to that. The Grammys are not even showing the hard rock/heavy metal awards anymore on TV. Also, there is not really printed press anymore. We used to have all kinds of magazines dealing with the genre. Basically, you've lost the entire subculture because nobody serves that. It's only the mainstream bands that get some press, if they get press."

FIVE FINGER DEATH PUNCH's eighth album, "F8", was released on February 28. The follow-up to 2018's "And Justice For None" caps a turbulent period for FIVE FINGER DEATH PUNCH in which singer Ivan Moody finally got sober after a near-fatal struggle with addiction, while co-founding drummer Jeremy Spencer bowed out of the band due to physical issues.