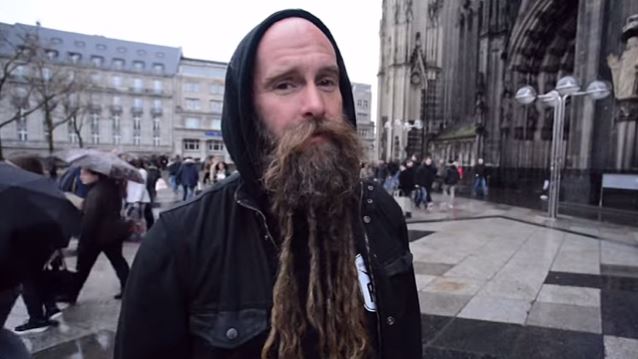 Brandan Schieppati, BLEEDING THROUGH frontman and owner of the training facility called Rise Above Fitness in Huntington Beach, California, recently conducted an interview with FIVE FINGER DEATH PUNCH bassist Chris Kael (pictured) for Brandan's podcast. You can now listen to the chat using the audio player below.

FIVE FINGER DEATH PUNCH has set "Got Your Six" as the title of the band's new album, due later in the year. The CD was once again helmed by Kevin Churko, the Canadian record producer/engineer and songwriter who currently lives in Las Vegas, where he works out of his private studio, The Hideout Recording Studio.

Drummer Jeremy Spencer was recently asked about the band's new material. He said: "I'm digging it, man. It's actually more brutal, with more extreme dynamics. There are some really mellow parts and then some really brutal parts. So we're running the whole gamut of sounds."

As previously reported, FIVE FINGER DEATH PUNCH and PAPA ROACH will head out on the road together this fall. Support on the trek will come from IN THIS MOMENT and FROM ASHES TO NEW.