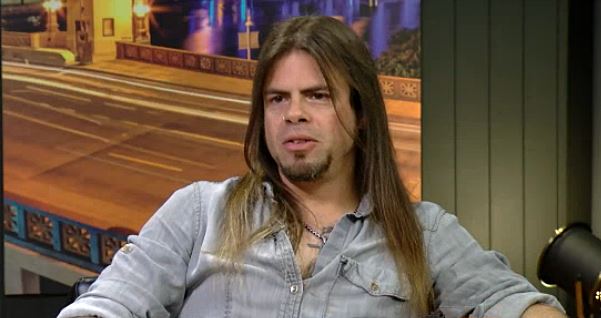 Singer Todd La Torre, who was doing upholstery for nearly two decades prior to joining QUEENSRŸCHE as the replacement for Geoff Tate, spoke to Tampa, Florida's Great 38 WTTA about how he has managed to bring his skills as an upholsterer to his current line of work.

"My grandfather was an upholsterer, my cousin was an upholsterer," said Todd (see video below),who owned La Torre's Upholstery & Custom in Largo, Florida for 17 years, playing in bands on the side. "And when [playing music] became my full-time career, I saw a lot of really cool clothing, and it sparked the idea in me that I could either create or modify my own stage wear and stuff that I like to wear, so it still allows me to be creative."

La Torre got his first drum kit at age 7 and spent his teenage years playing with several rock bands in high school. He tried junior college, but left for trade school and eventually took up upholstery.

He said: "I love to go to thrift shops and I just find all kinds of things and I'll tear them apart and add them to something else. These pants that I have on, I wear them all the time anyway — on and off stage — but I did these, a lot of the jackets that I wear and stuff like that. And I'm a smaller-framed guy, and it's hard to find really cool, unique things in men's clothing. So I will find remnants, and then… I think they call it upcycling. So I create my own one-of-a-kind clothing items."

He added: "It's good for me. I still have all my equipment from my business, and so I go out into my garage and I clear my mind. I turn some tunes on. And it allows me to be creative and kind of escape."

La Torre, who says that QUEENSRŸCHE has been his favorite band since he was 15 years old, joined the group several months after meeting QUEENSRŸCHE guitarist Michael Wilton at the 2012 edition of the NAMM convention in Anaheim, California.

QUEENSRŸCHE is currently working on material for a new studio album for a tentative early 2015 release.

QUEENSRŸCHE's self-titled album sold around 13,500 copies in the United States in its first week of release to land at position No. 23 on The Billboard 200 chart. The record arrived in stores on June 25, 2013 via Century Media Records.