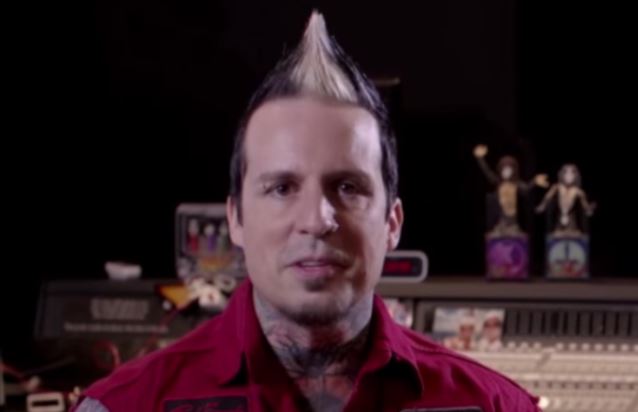 In a brand new interview with KLAQ's Lisa Sanchez, FIVE FINGER DEATH PUNCH drummer Jeremy Spencer recalled how, when he was seventeen years old and growing up in Boonville, Indiana, his band at the time, CORNUCOPIA OF DEATH, opened in Indianapolis for PANTERA.

"I was so excited to open for PANTERA, 'cause they were new," Jeremy said (hear audio below). "But they were [already] one of my favorite bands; they were, like, the new thing in my life, and I was turning everyone onto PANTERA that I could: 'You've gotta hear this band, man. It's incredible!' But we were doing a soundcheck, and we were playing a song that was really fast — a really fast double-bass part — and at the end of it, we hear this guy going, 'Faster! Play it faster!' And it was [PANTERA guitarist] Dimebag [Darrell Abbott] on the side of the stage just kind of messing with us. So we gave him one of our band t-shirts, and he was, like, 'I'll totally wear it, man.' And I looked in the Metal Maniacs magazine a couple of months later, and he was wearing our shirt in the magazine. So I thought that was really cool. I was, like, 17 years old."