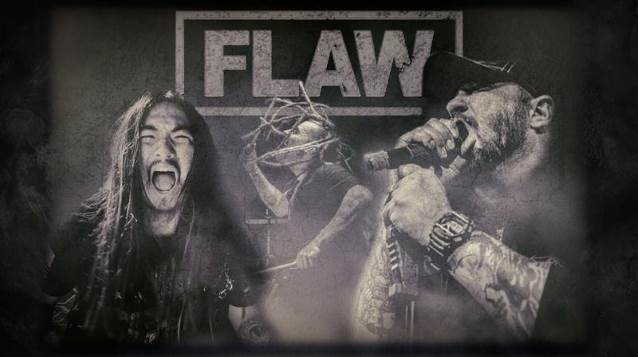 FLAW To Appear On Tonight's 'The Late Show With Stephen Colbert'

Colbert first noticed the band back in late March. During his monologue, Colbert made light of Donald Trump's proposed border wall. He used FLAW's GoFundMe page for a new tour van to help explain the situation. The host also promoted a concert date and proclaimed his love for FLAW.

Following the initial shoutout in the monologue, Colbert mentioned FLAW several more times on "The Late Show" and even tweeted about the band on his personal Twitter.

FLAW recently launched a PledgeMusic campaign for their upcoming album, "Vol. IV", which is scheduled for a fall release via Pavement Entertainment. The album can be pre-order with exclusive packages and inside access. The single from "Vol. IV", "Conquer This Climb", is available as an instant download for anyone who supports the campaign and also digitally on iTunes, Spotify and Amazon.

The rock heavyweights from Louisville, KY get some new wheels from Stephen Colbert and shut down 53rd & Broadway in New York City to film their latest music video.

Posted by The Late Show with Stephen Colbert on Friday, July 27, 2018