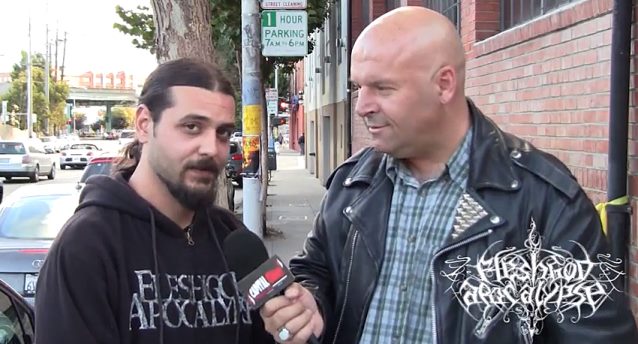 On August 25, The Mighty Z of Capital Chaos TV conducted an interview with guitarist/vocalist Cristiano Trionfera of Italian symphonic death metallers FLESHGOD APOCALYPSE at the DNA Lounge in San Francisco, California. You can now watch the chat below. Also available is performance footage of the San Francisco concert.

FLESHGOD APOCALYPSE's new album, "Labyrinth", was released on August 16 in Europe and August 20 in North America via Nuclear Blast Records. The CD was mixed and mastered by Stefano "Saul" Morabito. The cover artwork was once again created by Colin Marks, who was also responsible for several neoclassical pieces of art in the massive inlay.

Comments FLESHGOD APOCALYPSE's Francesco Paoli: "'Labyrinth' is THE album for FLESHGOD APOCALYPSE. It's the perfect combination of all our strong points with the best production we've ever had. It's definitely the most FLESHGOD thing we've ever thought with the most FLESHGOD riffs, lyrics, melodies, drumparts, solos, etc. We went deep inside the core of this music, we broke it, and we finally unleashed these eleven songs."

Added Tommaso Riccardi: "The concept of this album is based on the myth of the Labyrinth of Knossos and every character related to it. We focused on the philological aspect in order to represent all the elements of the classic world and, through a manic and meticolous research, we managed to create a metaphor with our times, as the maze can be associated with the endless search for what we really are. We're sure you will be stunned by this as much as we are."