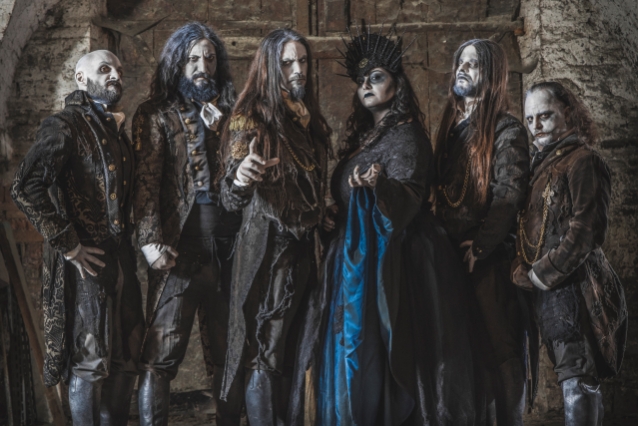 In an unfortunate turn of events, Italian orchestral-death metal giants FLESHGOD APOCALYPSE have been forced to postpone their North American tour due to travel restrictions implemented in response to the spread of new coronavirus (COVID-19). What was to be one of metal's most anticipated spring tours, where the band was to be accompanied at shows by a classical string quartet for the first time ever, will now take place at a later date to be announced as plans are confirmed. Information regarding tickets will be made public soon.

FLESHGOD APOCALYPSE said in a statement: "Hello everyone, it is with heavy hearts that we must announce the postponement of our upcoming tour in North America with the Veleno String Quartet and THE AGONIST. This has been decided upon due to current entry restrictions in the United States, following recent cases of coronavirus in Italy.

"We know that there are so many people waiting for us in the U.S. and Canada and we can't wait to see you. We'll keep you updated as shows are being rebooked, after which the show tickets and VIP tickets will be honored. So please stay tuned for further developments.

"To the many of you asking how you can help support during this time, merch purchases always help and will be used to get us back up to speed and on the road. You can check out our store here.

"Thank you guys so much for the immense support. We'll see you on the road, sooner than you think!"

Italian for "venom," "Veleno" marked FLESHGOD APOCALYPSE's first record in three years, since the release of the band's critically acclaimed record "King" (2016). The "metal part" of "Veleno" was recorded in Rome, Italy at Bloom Recording Studio and Kick Studio with long-standing collaborator Marco Mastrobuono, while the "orchestral part" — the ensembles — were tracked at Musica Teclas Studio in Perugia. FLESHGOD APOCALYPSE then took the effort over to Grammy-nominated Jacob Hansen (VOLBEAT, THE BLACK DAHLIA MURDER, EPICA) at Hansen Studios in Denmark for mixing and mastering. The entire production of "Veleno" took, according to Paoli, about three months. Artwork for the album was created by Travis Smith (AVENGED SEVENFOLD, OPETH, KATATONIA).