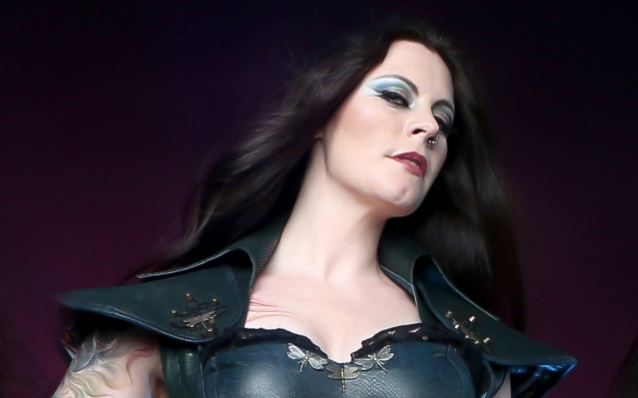 FLOOR JANSEN: NIGHTWISH Is What It Is Because Of The Good Music That TUOMAS HOLOPAINEN Writes

At this past weekend's Wacken Open Air festival in Wacken, Germany, NIGHTWISH singer Floor Jansen spoke to TotalRock Radio about the band's plans for the follow-up to 2015's "Endless Forms Most Beautiful" album. She said (see video below): "Next year, we go back to the studio. There's already a lot of material written by our mastermind, Tuomas [Holopainen, keyboards]. So, next year writing and getting that done, and then the year after, we'll be back with a new album."

Adding that she hasn't written any lyrics for NIGHTWISH so far, Floor said: "Tuomas does it all, and the way he does it, I wouldn't even dare to touch it unless he's, like, 'I'm not sure about this or that,' or I would come up with something that I think, 'You need to see this.' Then I will surely present it to him, and I know he would be open-minded to that. NIGHTWISH is what it is because of the good music that he writes."

Jansen also talked in more detail about the writing and recording process in NIGHTWISH, explaining: "When we made 'Endless Forms Most Beautiful', we started off with rehearsing, as most bands, I suppose, do. I guess everybody does it their own way, and how NIGHTWISH has done it in the past I don't know either. But I do know that for this album, we sat down together with the stuff that Tuomas mainly wrote. There were ideas and parts that are also from our bass player, Marco [Hietala]. So all the material was already sent to us beforehand, so we can go through it. My parts are played by a piano, and I had the lyrics, but I neeed to figure out the phrasing, as Tuomas had in mind; I went through that with him. But when I came into the rehearsal studio, it was actually much earlier [than] originally scheduled. But I moved to Finland — this was four years ago now — and so I was, like, 'Guys, I'm gonna drive over and just say hi.' But I already knew the music, so when I heard it, I was, like, 'I'll just sing along for a bit. Why not?' And that felt so good that we rehearsed through the whole period with each other, and that gave us so much time to really feel, 'Are the songs the way they should be?' which, in most cases, is, but sometimes when you play together, small things can change, or in one song, actually, a lot changed. And we had the advantage of having three singers there, so we already started preparing backing vocals, and, 'What happens when we do this and that?' It was really, really, really great. By the time the actual 'record' button was pushed, it kind of felt like we know what we're doing. Even though I always wish we could record an album after a tour, because then you've done it live so many times, it becomes a part of you. And you always start playing it and singing it slightly different. But that's how 'Endless Forms' came to be, and I'm very sure next year we will have the same approach for the new album."

Last month, Holopainen revealed that he had "about 80 or 90 percent of the material" already written for the next NIGHTWISH album. "It's gonna be 10, 11 songs, most likely," he said. "And we're gonna start recording next summer, in July, so if everything goes as planned, we're looking at a spring 2020 release."

The band has spent the last few months touring in support of its recently released "Decades" compilation.