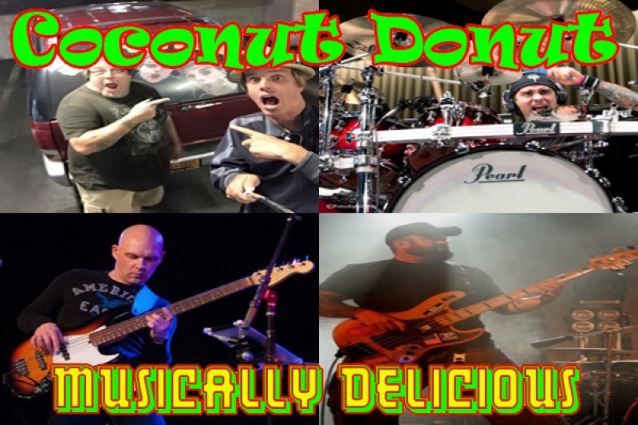 FLOTSAM AND JETSAM and SHADOWS FALL drummer Jason Bittner is showcasing another side of his playing with his latest side project, COCONUT DONUT. The music is a funky take on rock and roll, all of it infused with Bittner's virtuosic and well-seasoned rhythms.

According to a press release, COCONUT DONUT gives Bittner "a chance to flex a broader range of his chops, with funky beats, Latin rhythms, and open space uncommon to his speed metal roots. The catchy, well-crafted songs highlight Bittner's ability to drop tasty fills throughout his well orchestrated grooves."

COCONUT DONUT, originally conceived by Kurt Nous and Edward Biagiotti, came together over the last 18 months. The band's debut album, "Musically Delicious", which is due later in the year, also features bassists Chris Rybitski and Ed Lanouette (who has also played with Bittner in SHADOWS FALL, DARK DAY SUNDAY and WHISKEY MOUNTAIN WORSHIP).

Bittner got involved with COCONUT DONUT when Nous, who grew up in the same town, approached him with a demo of a few of the songs. Hearing the potential in the music, Bittner agreed to hop on as the drummer for the project, and eventually became so immersed in it that he became the band's producer.

Bittner has enjoyed the opportunity to play with a different feel and tempo than he is known for. Although he does not play in his traditional heavy style, he also does not hold back on the album, so longtime fans will not be disappointed.