Veteran Arizona metallers FLOTSAM AND JETSAM have announced the "Forbidden Territories Of The World" European headlining tour with DEW-SCENTED and IZEGRIM.

The metal rampage will kick off on Thursday, March 23 at Plutonium in Strasskirchen, Germany, and will continue throughout Europe, hitting Slovenia, Italy, Switzerland, France, Belgium, Germany, The Netherlands, Czech Republic, Poland and Hungary before concluding on Saturday, April 8 at Vienna Metal Meeting in Austria.

FLOTSAM AND JETSAM singer Eric "A.K." Knutson recently told Metalholic about "Flotsam And Jetsam": "There's a couple of songs on there that Spencer wrote for 'No Place [For Disgrace]' back in the '80s that never made it to the record that we kid of revamped and put on this new one. The remaining songs were half Steve Conley and half Mike Gilbert so they put a lot of input into this new record. Bittner's drumming just brought everything up to the next life level from where it was when we wrote everything. He's really been a huge addition."

Regarding the band's decision to make the new FLOTSAM AND JETSAM album a self-titled affair, Spencer told Metal Invader: "When we started talking through songtitles to see if there was a lyric theme, we felt there really wasn't anything that tied the songs together when it came to a theme. But the one thing that did tie the songs together was the new entity of FLOTSAM that we now are, with Steve Conley, myself, and Jason Bittner now in the band. We were all wanting to get back to more of the old-school FLOTSAM thrash sound, since that's where the band was when I left them in 1987. We looked at the self-titled aspect as being the start of the incarnation of the band that was always looking back on the history of the band's sound."

Spencer also talked about FLOTSAM AND JETSAM's current lineup. He said: "Steve and I have been in the band for three years now, and Jason about one and a half years. So we've became a tight unit on and off stage in that time. Steve is a great fit as a player and songwriter, has the same musical influence as the rest of us, and Jason has been a fan of the band since he was 16-17 years old, playing to 'Doomsday' and 'No Place' in his bedroom. So he understands the legacy of the band and he's allowed to still put his personality into the songs to still be himself, while keeping it as FLOTSAM as he feels it needs to be. The current lineup is also what drove the self title for the album, because we're really starting off new as a band putting out their first album." 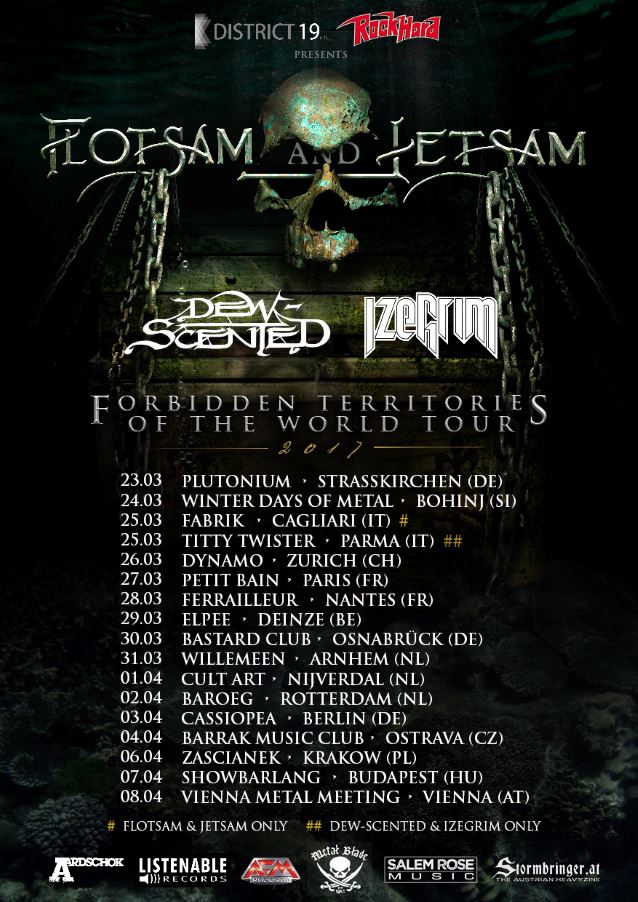