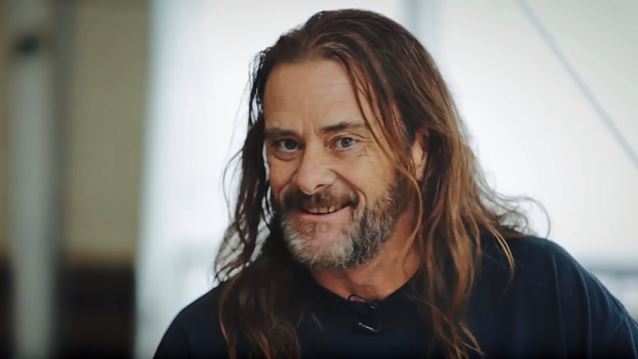 FLOTSAM AND JETSAM Singer: 'We Always Thought The Labels Didn't Do Anything But Collect Money'

Sebastiano Mereu of From Hero To Zero recently conducted an interview with FLOTSAM AND JETSAM singer Eric "A.K." Knutson. You can watch the full chat below. A few excerpts follow (transcribed by BLABBERMOUTH.NET).

Erik: "Big differences. For one thing, back in the '80s, it was a different view of being a rock star. It was all about the women and drugs, and having a good time, and waking up with a hangover. That's what rock and roll is all about. It's very different now. It's all about the heart and the music, and putting your thoughts onto a recording and all of that other stuff is really not important or even looked at now. It's very different."

On using PledgeMusic to fund the purchase of equipment for their new self-titled album:

Erik: "We basically built a studio in [guitarist] Mike Gilbert's house. Almost all of the recording was done there. Steve Conley [guitar] almost has the same setup at his house, so he did some of the guitar work. A lot of it was pre-production stuff. When it came time for recording, we made sure everyone was recording at Mike Gilbert's so it all had the same sound and feel. It was very comfortable. When you're at Mike Gilbert's house, you can sit on the couch and drink a beer and not worry about spilling [it]. It's very comfortable where you can feel like you're at home while recording."

On whether he misses the days when the band would record at expensive studios:

Erik: "The feel of being at a big studio, staying at a hotel the whole time… the feel I kinda miss. It gives you that 'rock star' feel. Nowadays, that's not what it's about anymore. It's about being comfortable and coming out with the finished product that you're looking for. It's not about being in a big studio or being a rock star on the road. It's about the finished product."

On working with AFM Records:

Erik: "It was a different situation this time. For the 'Cold' record and a couple before that, we basically had one label to choose from. We went with that one label. This time, we had several labels calling us up saying, 'Hey we want to do your new record.' AFM came up with the best plan for everything, for distribution, for advertising, for everything, they had a whole plan written out, saying 'Here's what we want to do for you.' It was above and beyond, ten times what the other labels were sending us. It was a pretty easy decision to go with AFM. They're pretty big FLOTSAM fans, too, so that made a big difference. We found out it was a lot of work when we did the PledgeMusic thing, to do everything yourself. We were, like, 'That's what the labels do!' We always thought the labels didn't do anything but collect money and collect our money on top of it. Once we did it ourselves a couple of times, we said, 'This is a lot of work.' AFM said, 'Hey, we'll do all of that work for you.' They've gone above and beyond so far. It's been really good with them."

On how he defines FLOTSAM AND JETSAM's success:

Erik: "Our success right now is on a climb. We notice that by how many people show up at the shows, what kind of tours we're getting offered, what kind of guarantees we're getting offered, and by the reviews of the albums. Album sales are really not a number considered anymore because people don't buy albums. They buy one song at a time online, or they buy the record online. That's really not where the money comes from anymore; that's not where you're success comes from anymore. It's touring, live shows, how much merchandise you sell, all of that stuff. We're definitely on a climb. There was a point, I want to say right around the 'Drift' record, we were making guarantees. We were on the road all the time, and then the band fell apart. I got new members and we had to start all over again. With this lineup, everybody in the band has been in the industry forever, whether they're originals or not. We all know what needs to be done. There's no real surprises for anything. It's nice working with professionals who all have the same goals and same expectations of what's going to happen."

On whether the band's legacy helps them in today's music climate:

Erik: "Looking back, I think everything we've done helps us with where we are now. Every band decision we made, every good decision we've made, everything has led us to where we are now, and what we're expecting. We really don't expect anything. We want to come out and play because we love playing in front of people, we love doing the live shows, we love being on the road. That's basically why we're out here doing this. We're not expecting millions of people to show up, we're not expecting to sell out on merchandise. We don't expect that; if it happens, great, if it doesn't, that's okay, too. We're on to the next show. We really have no expectations or egos about what the band should be and how people see us. We're really out here for the love of the music and the love of touring, and the love of our fans. That's really what this is all about for us."