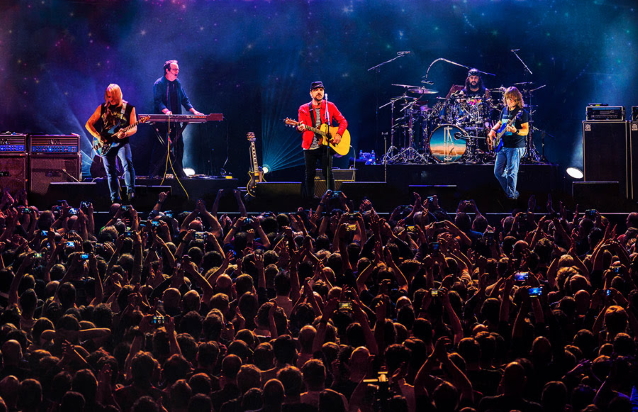 The album will be released on several formats, including orange transparent 3LP, Blu-ray, digitally, 2CD/DVD and a 40-page earbook which includes five discs; 2CD album, 2DVDs and a Blu-ray. The Blu-ray and DVDs in the earbook also include bonus material of music videos and concert footage of FLYING COLORS' Morsefest 2019 performance in Cross Plains, Tennessee.

FLYING COLORS had only played nine exclusive shows on the tour, culminating at the sold-out show in London, which saw Portnoy stand up mid-set and quip, "Welcome to the rarest of all sightings, rarer than a UFO sighting, rarer than a sasquatch sighting. A FLYING COLORS sighting, here on stage in London. This is a very sad night for us because it is the last night of the tour and we don't get to play together enough, so we're going to savour every moment tonight and enjoy each and every moment here on stage."

FLYING COLORS' latest studio album, "Third Degree", had only been released two months previously, and songs from that record make up just under half to the night's setlist, with the rest of the songs coming from the 2012 self-titled Billboard Top 10 debut and 2014s worldwide Top 10, "Second Nature". Backed with a HD projector screen, the five take the stage in the darkness amidst a rumble of applause and immediately groove into opener "Blue Ocean", and from the outset, their technical virtuosity, joyous melodies and reflective lyricism wash over the crowd proving to be the cornerstones of the FLYING COLORS sound.

Talking about walking out on the stage, McPherson recalls: "I remember how I felt right before the show in London. I was excited because my oldest daughter and her grandmother was there, whom I love dearly, and felt like I had the show, down by then. It's always a good feeling to take the stage when the material is ingrained enough to just let go and let it out."

They flow into the melodic progressive wonderment of "A Place In Your World", featuring guitar heroics from Steve Morse before they shift up a gear further for a duo of thunderous new songs, "The Loss Inside", and the almost rousingly apocalyptic sounding "More" — it's this that makes them so special, the ability to weave through several genres simultaneously.

The sight of LaRue and Portnoy bouncing off one another is a gloriously effortless sight to behold, while the wizardry of Neal Morse throughout is hypnotic. The band flit nimble-fingered through complex yet musical treasure trove of accessible and sophisticated pop songs, jazz-fusion, progressive-rock and multi-layered vocals from Macpherson, Neal Morse and Portnoy — giving the band added dimensions, many can only dream of. "Kayla" lights up the room and makes the 100-year-old theatre feel like the most intimate of settings.

From its opening in 1903 as a Music Hall, hosting variety performances and revues from the likes of Charlie Chaplin the venue has been a captivating one. The Shepherd's Bush Empire was designed by architect Frank Matchem, who also designed the world-famous Palladium, Victoria Palace Theatre and London Coliseum. Its mix of stunning Art Nouveau and Baroque style creates a luscious backdrop to the spiralling psychedelic progressive pop stylings of this supergroup.

"The Shepherd's Bush Empire is a classic theatre. Little nooks and crannies backstage, and that ornate vibe in the hall. Great people to work with which always makes for a fun gig," says McPherson.

As the camera weaves from cascading light effects and a captivating video backdrop to the view from the stage, sweeping above the crowd and along the lavish balconies, it's visually stunning and as the band journey through their back catalogue it at times creates an almost spiritual awakening and has you hooked through further crowd favorites such as "Geronimo", "Infinite Fire" and new songs alike until it reaches its triumphant finale "Mask Machine".

"Playing in FLYING COLORS is like being in a movie," says the singer. "It's so incredibly powerful emotionally, and to think this was going to be the last show was a bittersweet feeling. I love the other guys in the band and we always have such a good time on the road together. Our chemistry is like really good sushi. There's not one ingredient you could replace and it taste that good. It is one of the kindest and uniquely unified band's I've ever been in."

"Third Stage: Live In London" captures the band in all their uncompromising glory, five musicians that when they come together prove that they have a special and breath-taking connection. In the words of Portnoy, it's the "rarest of all sightings," but what a sight to behold.

On September 18, FLYING COLORS will also re-issue the "Flying Colors" and "Second Nature" albums on light blue 2LP, both limited to 1000 units. 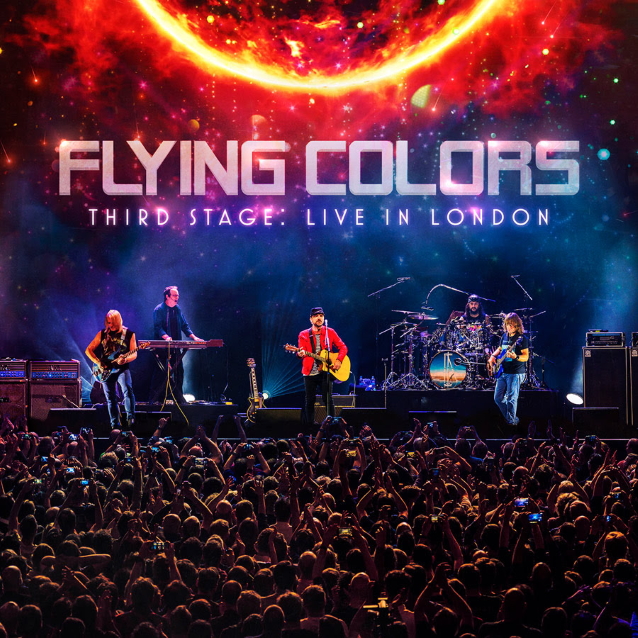