FOO FIGHTERS Classic To Be Covered As Charity Single

The BBC is bringing together some of the biggest and most respected artists from the U.K. and around the world for the most ambitious "Live Lounge" in its history, in support of the global effort to stay safe and stay home during the coronavirus crisis.

The "Stay Home Live Lounge" will be released at midday on Thursday, April 23 and will see some of the music industry's biggest stars collaborate on a cover of FOO FIGHTERS' "Times Like These" to raise money for charities, with the accompanying video to receive its world exclusive premiere during BBC One's "The Big Night In".

The artists taking part are (in alphabetical order):

The "Stay Home Live Lounge" will be recorded and filmed by artists from their own homes, and produced by Grammy- and Ivor Novello award-winning producer Fraser T. Smith. Smith is renowned for his work with Stormzy, Adele, Dave and many more, and counts seven U.K. No. 1 singles and 18 No. 1 albums among his achievements.

The "Stay Home Live Lounge" will be broadcast for the first time across Radio 1, Radio 2, 1Xtra, 6Music and Asian Network from midday on Thursday, April 23 as well as on demand on BBC Sounds. The accompanying video will be broadcast during "The Big Night In" on BBC One that evening and will be available to watch later on Radio 1's iPlayer and YouTube channels.

The BBC will also release the song as a single, with U.K. net profits to be combined with any funds raised by "The Big Night In". These funds will be split equally between BBC Children In Need and Comic Relief to provide essential support to vulnerable people of all ages and backgrounds across the U.K. who will be significantly impacted by the COVID-19 crisis. International net profits will go towards the WHO's COVID-19-Solidarity Response Fund.

BBC Radio 1's "Live Lounge" has long been an unmissable destination for artists, providing a globally recognised platform for intimate live performances and striking creativity. The format allows music fans to see and hear their favorite artists perform stripped-back renditions of their biggest tracks, as well as exclusive covers.

Dua Lipa says: "I am so proud that we've been able to come together to record this track and I can't wait for everyone to hear it. Thinking of everyone around the world at this difficult time. Love you all."

Ellie Goulding says: "I'm honored to join such a great line up for the 'Times Like These: BBC Radio 1 Stay Home Live Lounge' special. More so than ever it's important to remember the valuable role we each have to play in bringing hope, courage and strength to one another. I hope that this track brings comfort at such a difficult time.”

Fraser T Smith says: "It's humbling to have been asked to produce this amazing single, taking the FOO FIGHTERS' classic 'Times Like These' with the Radio 1 'Live Lounge' team and the incredible collective of artists who have come together to record whilst in isolation. Our vision was to create a stay at home version using phones, pots, pans and acoustic guitars that would honor the brilliance and honesty of the artists and song, rather than the trickery of an expensive recording studio. We tried to make this single in a totally different way artistically, relevant to today. The lyrics particularly resonate with us all at this challenging time, and I sincerely hope that money raised can help the plight of the unified battle against COVID-19 around the world."

Clara Amfo says: "The 'Live Lounge' is so beloved by Radio 1's listeners and I'm so pleased that it's used in a way to lift people's moods and raise money for those impacted by COVID-19. Music is a gift and we're so grateful to FOO FIGHTERS for this song and to all the artists for their involvement and interpretations. Download to help, sing along and stay safe."

Chris Price, head of music for Radio 1, says: "Thank you to Fraser T Smith, FOO FIGHTERS and every single artist who threw their energies into this extraordinary collaboration. 'Times Like These: BBC Radio 1 Stay Home Live Lounge' sends a simple message to the world — that the power of music and human creativity can overcome seemingly insurmountable obstacles to build a sense of community, togetherness and determination, even when we are forced apart." 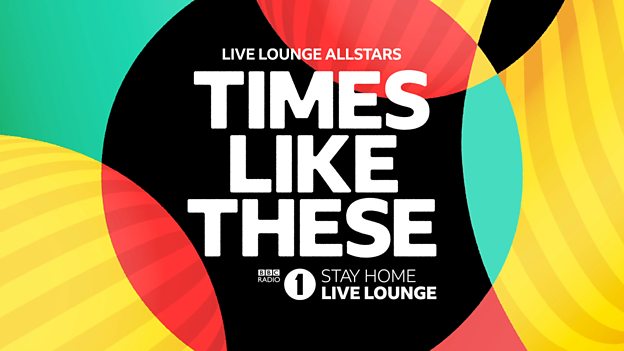