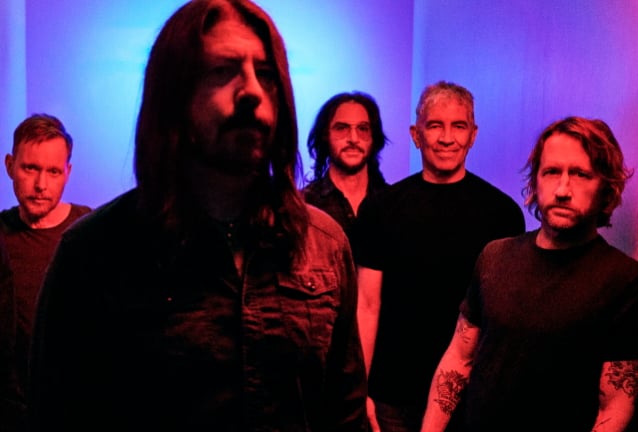 FOO FIGHTERS have replaced PANTERA on the billing of the Rock Am Ring and Rock Im Park festivals in Germany this spring.

On Monday (January 23),organizers for the festivals announced that the reformed PANTERA — featuring 's surviving members Philip Anselmo and Rex Brown (bass) along with guitarist Zakk Wylde (OZZY OSBOURNE, BLACK LABEL SOCIETY) and drummer Charlie Benante (ANTHRAX) — would no longer appear at the two simultaneous rock festivals, which will take place June 2-4 in Nürburgring and Nürnberg, respectively. The decision to remove the band from the bill came after "intensive conversations" over the fact that Anselmo made a Nazi-style salute when he performed at the January 2016 "Dimebash" event at the Lucky Strike Live in Hollywood in honor of late PANTERA guitarist "Dimebag" Darrell Abbott. He also appeared to say "white power" as he made the gesture, but later claimed he was joking about drinking white wine backstage and was reacting to the audience members up front who he says were taunting him.

FOO FIGHTERS' addition to the festivals was announced by the bandmembers themselves via their official Instagram, with the band writing, "Germany – we'll see you Friday, June 2nd at Rock Am Ring and Sunday, June 4th at Rock Im Park! Tickets on sale now!"

Late last month, FOO FIGHTERS vowed to carry on as "a different band" following the passing of drummer Taylor Hawkins.

The FOO FIGHTERS wrote: "As we say goodbye to the most difficult and tragic year that our band has ever known, we are reminded of how thankful we are for the people that we love and cherish most, and for the loved ones who are no longer with us.

"FOO FIGHTERS were formed 27 years ago to represent the healing power of music and a continuation of life. And for the past 27 years our fans have built a worldwide community, a devoted support system that has helped us all get through the darkest of times together. A place to share our joy and our pain, our hopes and fears, and to join in a chorus of life together through music. Without Taylor, we never would have become the band that we were — and without Taylor, we know that we're going to be a different band going forward.

"We also know that you, the fans, meant as much to Taylor as he meant to you and we know that when we see you again — and we will soon — he'll be there in spirit with all of us every night."

Hawkins was found dead in March 2022 in a hotel room in Colombia, shortly before FOO FIGHTERS were due to play a festival in Bogotá. He was 50 years old.

No cause of death was announced, although a toxicology report showed traces of 10 substances in his body, including opioids, marijuana and anti-depressants.

Investigators did not say whether the mix of drugs was a factor.

Hawkins had been the FOO FIGHTERS drummer for 25 years, taking over from original drummer William Goldsmith in 1997. He is survived by his wife Alison and their three children.

Other notable tributes to come in the months following Hawkins's death included a segment at this year's Grammy Awards, a drum circle in Taylor's hometown, and a live performance of the FOO FIGHTERS song "My Hero" by more than 1,000 musicians.