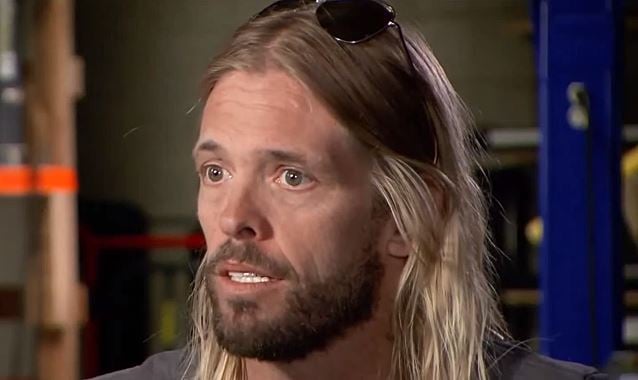 According to The Pulse Of Radio, FOO FIGHTERS drummer Taylor Hawkins told Q magazine that even though he understand what FOO FIGHTERS frontman Dave Grohl is after with all the recent band-related documentaries and films, he personally doesn't enjoy being on camera. Hawkins explained, "It's never been one of my ambitions to be famous for being on TV. But I think Dave's on the money. It isn't purely business ambition, because I know he truly loves to do this… He loves the process. Just as I, on a much smaller level, like the process of recording a song. That's not enough for Dave any more. No, I don't like being filmed, but it is part of it now."

First there was the 2011 FOO FIGHTERS documentary "Back And Forth", which chronicled the band's history. Then there was Grohl's "Sound City" film in 2013 about the now-defunct studio, in which some of the band members appeared. And finally there was the eight-part HBO series this past fall which documented the making of the latest FOO FIGHTERS album, "Sonic Highways".

Hawkins told The Pulse Of Radio that he didn't like being filmed while making "Sonic Highways". "I'm probably in the movie less than anybody, really, because of my unwantingness to hear every smartass thing I had to say all day long," he said. "You know, I've just got a dumb, loud mouth and I don't shut the hell up ever and so, 'I can't wear a microphone all day, everybody's gonna hate me by the end of this.'"

"Sonic Highways", the FOO FIGHTERS' eighth studio album, was recorded on location in eight different American cities, with the cameras following them around to each session.

The show featured a history of each city's local scene and musicians, as well as footage of the band recording the new disc with some of those local artists as guests.

The band will launch its biggest North American tour ever later this year, hitting arenas, amphitheaters and stadiums in the summer and fall.