During a recent appearance on the "Rock Talk With Mitch Lafon" podcast, FOREIGNER bassist Jeff Pilson discussed the group's recent performances with original vocalist Lou Gramm. "It was a wonderful celebration of FOREIGNER music," Pilson said (hear audio below). "Everybody was in a great state; everyone had a great attitude. It was very idyllic. Lou Gramm is a wonderful human being, and that voice, still, to me, there are moments when it just raises the hairs on the back of my neck. I think we all feel that way. It was such a pleasure. The original guys, they're all great. They really are a talented, wonderful bunch of guys. They're good people, and they're great musicians. Those shows we did were very, very magical. Didn't really know what to expect — we were kind of just rolling the dice — but it ended up being great. For me, it was great to see. What a wonderful thing — what a great thing that we could do that, that we can all kind of come together. The vibe was great. It was wonderful."

Pilson also discussed FOREIGNER's upcoming live release, "Foreigner With The 21st Century Symphony Orchestra & Chorus". "It's pretty spectacular," he said. "Last May, we spent a week in Lucerne, Switzerland. We rehearsed for a few days and then did two shows with the 21st Century Orchestra and Choir. It was put on by the city of Lucerne, so it was wonderful. The gentleman who puts it on, who kind of represents the city in this thing, also owns the hotel that we stayed at. He's a great guy. We stayed at this lovely hotel in beautiful, scenic Lucerne, Switzerland. It was just a magical event, and we spent hours every day working very, very hard, but we got two shows recorded that came out fantastic. That's what the DVD and CD are. It's goosebump-oriented stuff. There's some musical moments that are so beautiful on this thing. Mick Jones's music just stands the test of time, and it stands the test of, 'Do whatever you do it. As long as you do it well, it's going to make these songs even greater,' because they're great songs to begin with. I can't wait for people to hear it, especially. The sound of it is just so magnificent."

Pilson says while certain songs were "completely rearranged" for the recording, "at as a rule, Mick wanted it to rock. He said, 'Listen, I don't want this to water anything down. There's nothing worse than just taking these songs and softening them up with strings.' He said, 'Let's not do that.' It still kind of rocks, and some of the jamming solo sections, there isn't orchestra. Other parts, there's overtures and preludes where the orchestra and the choir do these really great, interesting things. It's like a rock show, where these elements of the orchestra happen that, if anything, lift it rather than soften it. It's pretty damn cool. Mick was very tasteful in how he applied the orchestra and the choir, and it's just a very, very cool thing."

While many of their peers have announced farewell tours, FOREIGNER continues to tour aggressively, but Pilson admits he's considered a future where he's not a member of a touring band. "Of course I think about it — I'd be inhuman if I didn't," he said. "The body aches and pains, that becomes more prevalent as time goes on. The traveling gets tougher, and all that. But as long as I'm still in a great band that sounds good [and] that delivers to the people, whoever that may be, I'll probably keep doing this. I'd love to slow down, no question about that. I'd love to slow down and do more studio stuff. That, absolutely, is true. But the thing is, right now, you've kind of got to strike while the iron is hot, and the iron is hot for live music right now. Because that is the case, I don't mind it one bit. I don't see me ever retiring, to be honest. I may get off the road some day; that would be fine, but I don't see me retiring. I'm going to still keep making music and still keep doing things. No farewell tour for me."

However, he admits he's unsure when FOREIGNER will release new original material in the future. "I wouldn't say it's needed," Pilson said, "but I would say that if it happens, it'd be welcome. What I don't see is a full album of new material. The process to make the 'Can't Slow Down' record in 2009, it was really hard to do, because we're still on the road all the time. I don't see us doing a full album of new material. I think what we'll do is, in packages and in various things that we release, there will be snippets and new bits here and there. I think Mick could really deal with that as opposed to a whole record. A whole record, it's too much in this day and age because we're on the road so much. There's no specific plans yet, but there are things we're talking about. We do like it when we get to infuse that new blood. That's always a good thing. I think there will be some more of that — not sure when or how, but it'll happen at some point."

"Foreigner With The 21st Century Symphony Orchestra & Chorus" will be released on April 27 via earMUSIC. 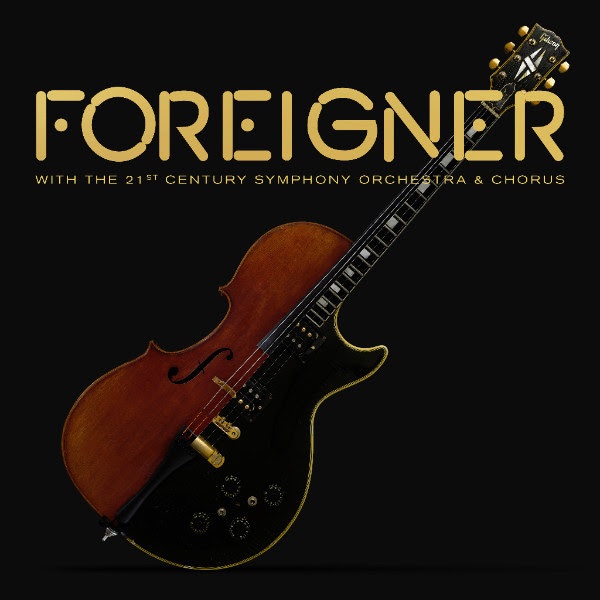