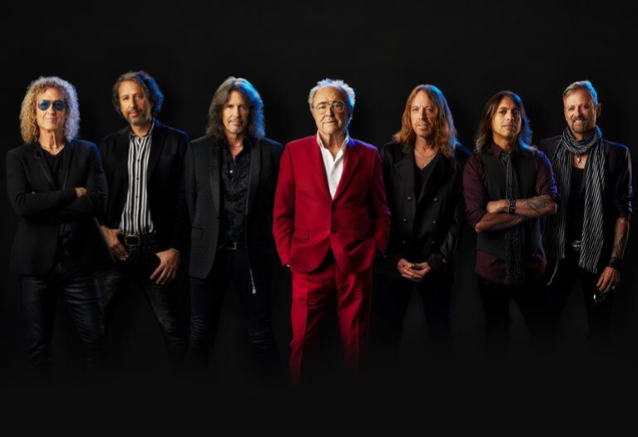 Legendary rock band FOREIGNER partnered with the American Red Cross to donate and raise funds for Ukrainian relief efforts during its exclusive three-week, sold-out headlining residency engagement at The Venetian Theatre inside The Venetian Resort Las Vegas in March and April 2022, raising more than $100,000.

FOREIGNER donated $5,000 from each show to the American Red Cross Ukrainian relief efforts. The band also provided hand-signed guitars as gifts to concertgoers who joined them in supporting the initiative by donating $1,000 or more to the American Red Cross representatives on site. Over seventy of FOREIGNER's generous fans stepped up and helped the band reach this meaningful milestone.

The show, "The Best Of Foreigner 4 Live", was a celebration of the 40th anniversary of FOREIGNER's biggest selling album. The album was released on July 2, 1981 and spent more weeks at No. 1 than any other album in the history of Atlantic Records. "Juke Box Hero" came in 1986 and has since become FOREIGNER's signature rock anthem. The audience was treated to songs from "4" as well as FOREIGNER hits such as "Cold As Ice", "Feels Like The First Time" and "I Want To Know What Love Is".

Said FOREIGNER founder, Songwriters Hall Of Fame inductee and lead guitarist Mick Jones: "The plight of everyone impacted by this conflict is an international tragedy. While we face our own ongoing struggles here at home, I am thrilled at the opportunity to work with the American Red Cross in doing our part in the relief efforts. Our goal is to offer some solace or small comfort to traumatized people in the region. I could think of nothing more American than a gesture of such brotherly love to those who are feeling so displaced and alone in this world right now."

As fighting in Ukraine continues, the global Red Cross network is providing lifesaving aid to those in need — both in the country and in neighboring areas. More than three million people have fled Ukraine to nearby countries and an estimated 18 million — a third of the country's population — will need humanitarian assistance. As the fighting intensifies, so does the dire humanitarian situation and needs on the ground.

For more information on how the Red Cross is helping relief efforts in Ukraine, click here.

With ten multi-platinum albums and 16 Top 30 hits, FOREIGNER is universally hailed as one of the most popular rock acts in the world with a formidable musical arsenal that continues to propel sold-out tours and album sales, now exceeding 80 million.

Responsible for some of rock and roll's most enduring anthems including "Juke Box Hero", "Cold As Ice", "Hot Blooded", "Waiting For A Girl Like You", "Feels Like The First Time", "Urgent", "Head Games", "Say You Will", "Dirty White Boy", "Long, Long Way From Home" and the worldwide No. 1 hit "I Want To Know What Love Is", FOREIGNER still rocks the charts more than 40 years into the game with massive airplay and continued Billboard Top 200 album success.