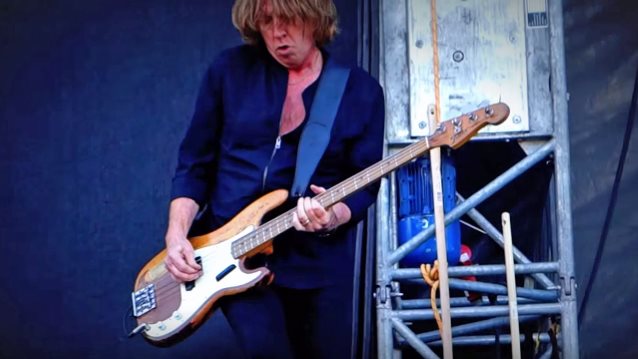 Jeff Pilson says that Donald Trump is "a dangerous man" whose vitriolic and divisive rhetoric could ignite another American civil war.

An acclaimed producer and a veteran bassist who has played with DIO, FOREIGNER, DOKKEN and T&N, Pilson made his comments during a recent interview with Yesterdaze News to promote FOREIGNER's ongoing fortieth-anniversary tour.

"Putting ideology and left-or-right, Democrat-Republican aside, putting all that stuff aside, I'm afraid I just have a lot of fear and skepticism about our commander-in-chief, who I just think is potentially — I hope I'm wrong — but I think he's a dangerous man," he continued.

Aa a father of a thirteen-year-old daughter, Pilson said that he is "thinking about the future," wanting "her to have the opportunities that I've had, and I see a lot of those opportunities going away. And I understand people being fed up with the system — I really get that — and I understand people being disappointed with how things have worked for a long time. But I think we need to find a civil way of dealing with this, because otherwise… I mean, if you look at history, this is the kind of thing that leads to huge unrest and, in the worst-case scenario, civil war.

"I guess I'm just saying, time to be reasonable, time for people to cast their… Let's stop all this bullcrap of bickering and whatnot."

According to Pilson, it would help if "we could get money out of politics; I think that's become very, very dangerous," he said. "I wish people had an incentive to work together. Right now, the way the system is set up, people don't have incentives to work together, because the politics have gotten so screwed up by money and everything and have been pushed to the extremes.

"It's time to come to the center, find some solutions, work together, stop the rhetoric. We've done it before, [and] we can do it again," he said.

Jeff added that, as a touring musician, he frequently travels internationally, "and most of the people I see overseas are scared to death of the United States right now," he said. "They're worried, and I understand that. I am too. I think we're at a very, very dangerous place right now.

"Again, this has nothing to do with left or right or anything like that, I just think that Trump is dangerous and I think he's a adding a poison to the mix that is so toxic and so horrifying that unless everybody else gets reasonable and pulls it together, we could be heading down a very dangerous path," he reiterated.

FOREIGNER is promoting a new career-spanning compilation titled "40" that features forty hits from forty years. Rhino released "40" on May 26 as a double-CD set that includes forty songs recorded between 1977 and 2017. A double-vinyl version that features twenty-three songs was made available on June 2.

A new DOKKEN concert DVD focusing on the band's reunion tour is tentatively due before the end of the year or in early 2018. The set will feature footage from two of the Japanese shows — including Tokyo — as well as the band's very first comeback gig, which was held on September 30, 2016 at Badlands Pawn Guns Gold And Rock 'N' Roll in Sioux Falls, South Dakota. There will also be one brand-new song, written and recorded specially for this release.