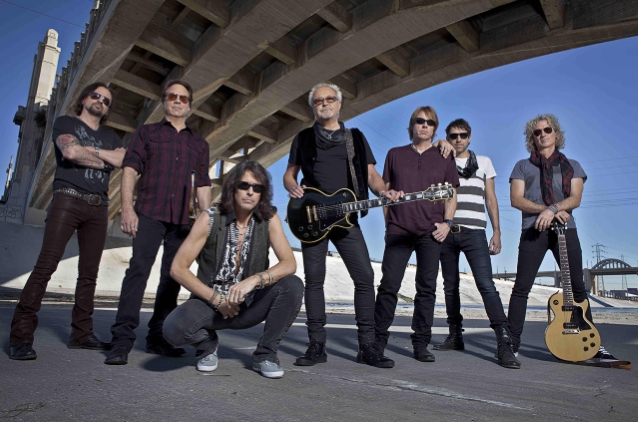 A new musical built around legendary band FOREIGNER's peerless catalog of hit songs will make its world premiere this winter in Toronto.

FOREIGNER recently celebrated its 40th anniversary of rocking the charts and arenas worldwide. The highly anticipated musical "Jukebox Hero, The Musical" from Calgary-based Annerin Theatricals will play an exclusive limited engagement at Toronto's Ed Mirvish Theatre in February. Originally scheduled for February 21 to 24, 2019, due to demand, two shows have been added to the original run for February 20 at 8:00 p.m. and 24 at 7:30 p.m. Tickets are on sale Saturday, November 24 at JukeboxHeroMusical.com.

A coming-of-age saga featuring 16 of FOREIGNER's iconic Top 30 hit songs "Jukebox Hero, The Musical" tells the story of the closing of rust-belt town of Blaydon, Pennsylvania's biggest factory. Confronted with a deluge of unemployment and instability, the community calls on Ryan, a local boy turned rock 'n' roll superstar, for help. Yet Ryan never left his roots on good terms, so must confront the ghosts of his past as well as a home he no longer recognizes.

The musical originated in a conversation between FOREIGNER founder and lead guitarist Mick Jones and Diana Ross. During a chance meeting in an airport lounge in the 1980s, Ross planted the seed of the idea that FOREIGNER's music belonged in a stage production. The result is an epic production that builds on the timeless hits that defined a generation, including "Cold As Ice", "Hot Blooded", "Waiting For A Girl Like You", "Dirty White Boy" and "I Want To Know What Love Is".

Canadian audiences have already tuned into the "Jukebox Hero" experience through several workshop productions in Calgary and Edmonton. The Calgary Herald reported that the response was "electric" from a "near-capacity crowd" with critics lauding its "eye-popping set" and "dynamite" performances from an all-Canadian cast that included Geordie Brown ("Rent", "Stan Rogers: A Matter of Heart") and Graham Scott Fleming ("Kinky Boots").

Prolific British writing duo Dick Clement and Ian La Frenais ("The Commitments", "Across The Universe") were brought in to pen the book, with an artistic team led by FOREIGNER founder, songwriter and lead guitarist Mick Jones and FOREIGNER's managers Phil Carson and Stewart Young, whose career track record includes AC/DC; EMERSON, LAKE AND PALMER; YES; and LED ZEPPELIN. This new Canadian production will be directed by Randy Johnson ("A Night With Janis Joplin"),and choreographed by Parker Esse, with musical direction by Mark Camilleri ("Toxic Avenger", "Dr. Seuss's The Lorax").