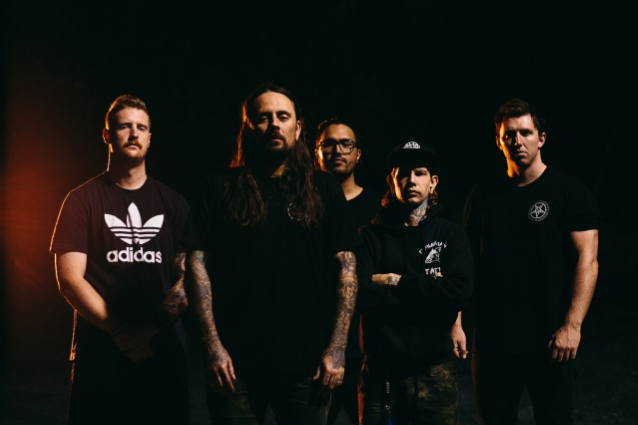 Australian deathcore masters THY ART IS MURDER have released a brand new single, "Death Perception". The song, which was written and recorded during the sessions for last year's "Dear Desolation" album, was produced, mixed and mastered by longtime collaborator Will Putney.

This past summer, THY ART IS MURDER guitarist Andy Marsh spoke to Illawarra Mercury about the 2015 departure of the band's vocalist, CJ McMahon, over financial woes and substance-abuse issues. The frontman has since returned to the fold for "Dear Desolation".

"CJ's one of those people, he's never been diagnosed but probably has some kind of borderline personality disorder or bipolar," the guitarist said. "He was always difficult, and then compound that with drugs. Our problem was he was a dick, and his problem was that he had problems, and he was a drug addict."

According to Marsh, a number of factors have contributed to making band activities far more enjoyable in the year and a half since McMahon came back to the group.

"The band has made more money, we became more successful and we can afford things like tour buses and [therefore] travel a lot more comfortably," he said. "That makes a massive difference on the road when we're doing these long tours. He quit the drugs, worked on his personality a lot and we make more money so he's less stressed. And because we make more money, we can have crew who can work for us to make things easier."

"Dear Desolation" was released in August 2017 via Nuclear Blast Entertainment. The disc was produced, engineered, mixed and mastered by Will Putney at Graphic Nature Audio in Belleville, New Jersey. Artwork was created by Eliran Kantor (HATEBREED, TESTAMENT, ICED EARTH, SODOM).

Earlier this year, CJ McMahon told Exclaim! that he hates it when THY ART IS MURDER is lumped in with the "cliché hashtag" of deathcore music.

"We all listen to so many different styles of music," he said. "That's what makes us unique; that we're so in touch with music as a whole.

"We're just writing music that we want to play and hear," he explained. "If people aren't going to give us a chance because they've heard someone call us a deathcore band, I really don't give a fuck. It is mindblowing that people will put shit on you without listening to your band just because of a genre's name. It's just a strange thing, man. I really don't get it."