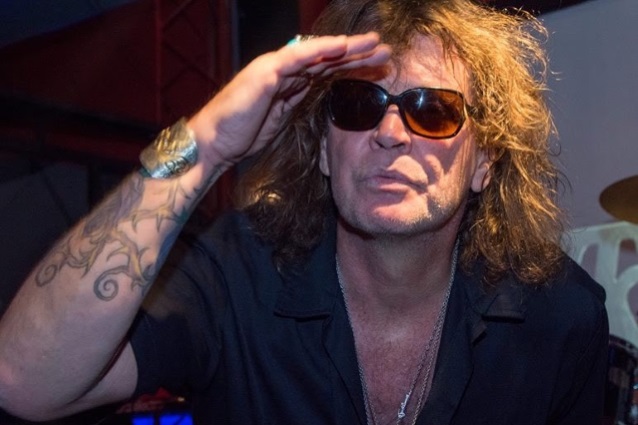 "I was searching for a record company that would see my vision as a solo artist so I reached out to Mike Tramp [ex-WHITE LION] and he suggested I speak with Michael H. Andersen at Mighty Music," Reece said. "Michael teamed me up with the Danish producer and songwriting team Marco Angioni and Martin Jepsen Andersen, both from the band MERIDIAN. The collaboration we're working on is exactly where I want to go musically — and Michael H. Andersen and Mighty Music have given me a home to release my new record and given me 100 percent support and belief in this new record! The album will be recorded at Death Island Studio in Denmark with Marco Angioni as producer, and is expected to be released in late 2018. Touring for the album will follow."

The current SAINTED SINNERS vocalist was recruited for ACCEPT's "Eat The Heat" album in 1989 following the departure of Udo Dirkschneider. Reece's higher-pitched delivery was in sharp contrast to Dirkschneider's distinctive style, and overall, the album was a critical and commercial disappointment,

Midway through the "Eat The Heat" tour, differences between the band and Reece had come to a head, leading to the altercation between the singer and bassist Peter Baltes in Chicago. By the end of 1989, ACCEPT had hung it up.

Michael H. Andersen of Mighty Music said: "I know David Reece is so much more, but the 'Eat The Heat' record is one of those albums from the late 80s I still play a lot. Listening to that album on my walkman made life a lot easier being a teenager in suburbia Denmark in the late '80s. Having said that, it is amazing to witness how much on fire David still is today. His vocal skills are still in another league and this man definitely has the energy to make a great new album. Proud to be welcoming you to my home, David."

Reece, who has also played with BONFIRE and BANGALORE CHOIR, will release the new SAINTED SINNERS album, "Back With A Vengeance", in February.

Reece will embark on European tour this year on which he will perform "Eat The Heat" in its entirety.