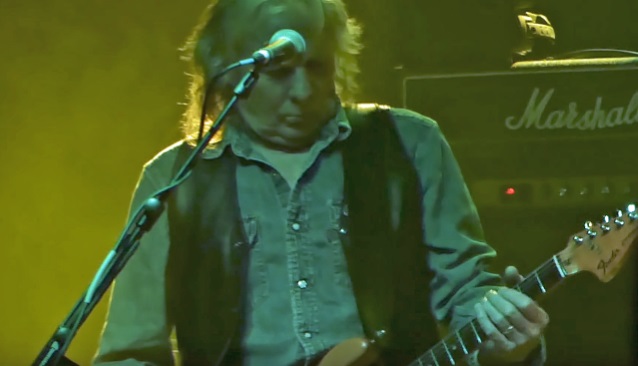 Former MOTÖRHEAD and FASTWAY guitarist "Fast" Eddie Clarke passed away yesterday (January 10) after a battle with pneumonia. He was 67 years old.

Clarke was a member of MOTÖRHEAD from 1976 until 1982. He was one-third of the band's classic lineup, which also included drummer Philthy "Animal" Taylor, who died in November 2015 of liver failure. Ian "Lemmy" Kilmister succumbed to cancer the following month.

MOTÖRHEAD has issued the following statement: "We are devastated to pass on the news we only just heard ourselves earlier tonight... Edward Allan Clarke — or as we all know and love him Fast Eddie Clarke — passed away peacefully yesterday. Ted Carroll (who formed Chiswick Records) made the sad announcement via his [Facebook] page, having heard from Doug Smith that Fast Eddie passed peacefully in hospital where he was being treated for pneumonia. Fast Eddie... keep roaring, rockin' and rollin' up there as goddamit man, your Motörfamily would expect nothing less!!!"

MOTÖRHEAD guitarist Phil Campbell said: "Just heard the sad news that Fast Eddie Clarke has passed away. Such a shock. He will be remembered for his iconic riffs and was a true rock 'n' roller. RIP Eddie."

MOTÖRHEAD drummer Mikkey Dee added: "Oh my fucking god, this is terrible news, the last of the three amigos. I saw Eddie not too long ago and he was in great shape. So this is a complete shock. Me and Eddie always hit it off great. I was looking forward to seeing him in the U.K. this summer when we come around with the [SCORPIONS]… now Lem and Philthy can jam with Eddie again, and if you listen carefully, I'm sure you'll hear them, so watch out!!! My thoughts go out to Eddie's family and close ones."

Clarke left MOTÖRHEAD in 1982 while on tour in the United States and was replaced by THIN LIZZY guitarist Brian Robertson.

Back in 2016, Clarke told EonMusic about his exit from MOTÖRHEAD: "After the show — which I though was terrible, the agent, Nick Harris came to me and said, 'Why don't we go and talk to Phil and Lemmy? and I said, 'Okay,' because I didn't want to leave — it was the last thing I wanted. So he takes me into their dressing room, and it's full — THE PLASMATICS, everybody's in there. And they peel away from the crowd down the end of the dressing room, and I'm standing with Nick Harris and they say, 'Yeah, what do you want?' and I said, 'Well guys, this is a bit over the top, isn't it? Can't we just carry on — what's the problem here?!' They said, 'No, man, fuck off.' And that was it. What could I do? So I walked out, and that was the end of it."

In 2014, Clarke reunited with Lemmy to play "Ace Of Spades", one of MOTÖRHEAD's best-known songs, at the band's concert in Birmingham, England.

We are devastated to pass on the news we only just heard ourselves earlier tonight...Edward Allan Clarke - or as we all...