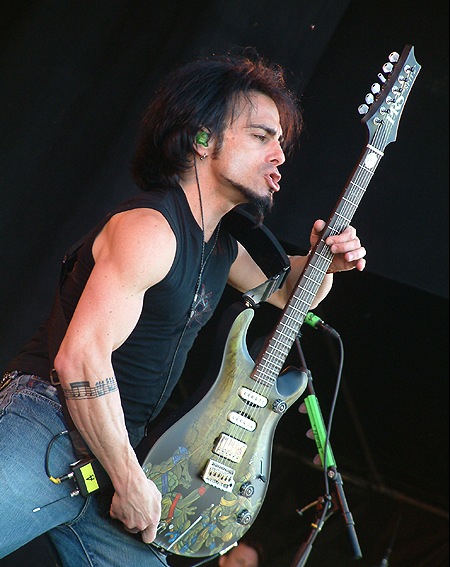 Former ANTHRAX and current RED LAMB guitarist Dan Spitz was interviewed on the latest edition of the "Maximum Threshold" show. You can now listen to the interview in its entirety using the audio player below.

In a December 2010 interview, Mustaine revealed that he helped fine-tune the songs on RED LAMB's debut album after hearing some of the material in its early stages of development.

"[Dan] was working on a little side project, and I'd heard it a while ago and it kind of went by in passing 'cause he was just starting it," Mustaine said. "And I heard it about three weeks ago; he was almost done. And I said, 'Man, I love this record.' I said, 'And do you think it's done?' And he goes, 'Yeah.' And he goes, 'Why? What do you think?' And I said, 'Well, I would kind of do this and that.' And he goes, 'Really? Go ahead.' And I went, 'Really?' So I rolled up my sleeves and I completely dedicated myself to Danny's record for the last three weeks, working tirelessly in my studio on this record with him. And it's that good. I heard it and I just went, 'Oh my God!' It's like a cross between, say, DISTURBED, SOUNDGARDEN and RAGE AGAINST THE MACHINE kind of thing. Little bit of some smatterings of ANTHRAX because of the speed stuff, but it's much more modern and much more heavy sounding."