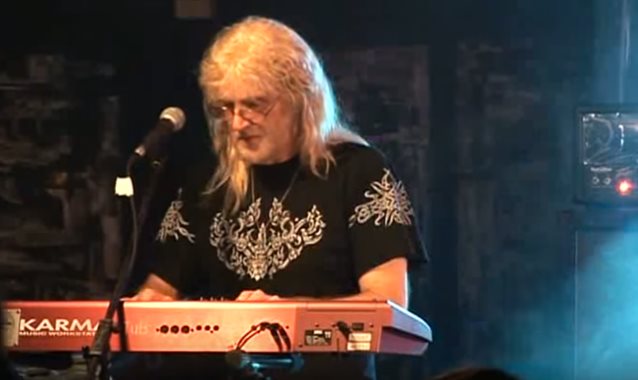 Former BLACK SABBATH keyboardist Geoff Nicholls died this morning after a long battle with lung cancer. He was 68 years old.

Nicholls's passing was confirmed by SABBATH guitarist Tony Iommi, who wrote about his former bandmate: "I'm so saddened to hear the loss of one of my dearest and closest friends Geoff Nicholls. He's been suffering for a while now with lung cancer and he lost his battle this morning. Geoff and I have always been very close and he has been a real true friend to me and supported me all the way for nearly 40 years. I will miss him dearly and he will live in my heart until we meet again. Rest in peace, my dear friend."

Said SABBATH singer Ozzy Osbourne: "Geoff Nicholls was a great friend of mine for a long time. He will be greatly missed. I'm very saddened at the news."

Nicholls, who played keyboards on all of SABBATH's albums between 1980 and 1995 and toured with them, was reportedly in remission from cancer at the time of his death but succumbed to the side effects of chemotherapy.

Nicholls's first appearance on a SABBATH album was on 1980's "Heaven And Hell". Although his main role with SABBATH was on the keyboard, Nicholls also played some rhythm guitar at concerts. In addition to not always being credited as a full member of the band, Nicholls rarely appeared on stage during SABBATH shows and would instead play on the side of the stage or backstage.

Nicholls's involvement with the band ended when Adam Wakeman (a member of Ozzy Osbourne's solo band) was chosen to play keyboards during SABBATH's 2004 and 2005 tours as part of Ozzfest.

Martin said: "Saddened to hear of the passing of Geoff Nicholls... keyboard player and friend from SABBATH. Safe journey, mate."

Before joining BLACK SABBATH, Nicholls was member of the NWOBHM (New Wave Of British Heavy Metal) band QUARTZ, whose 1977 debut album was produced by Iommi. In the late 1960s and early 1970s, Geoff played lead guitar for the Birmingham band JOHNNY NEAL AND THE STARLINERS.

I'm so saddened to hear the loss of one of my dearest and closest friends Geoff Nicholls. He's been suffering for a...