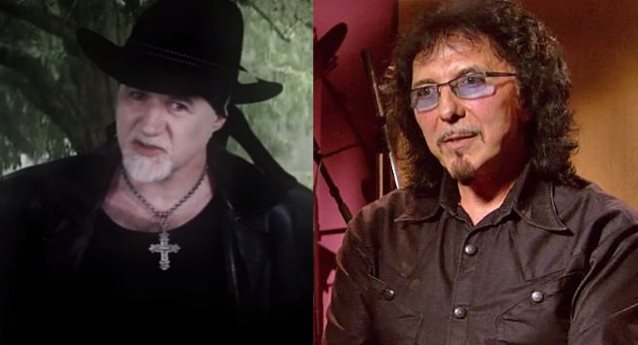 Martin took to his Facebook page after the event to write: "Well, what a great day. I attended the unveiling of Cozy Powell's memorial plaque in his hometown of Cirencester, along with Brian May, Neil Murray and Tony Iommi... And, to my surprise, [I] was greeted by Tony Iommi VERY warmly. It's the first conversation of any length I have had with him in 15 years! And it turns out we may well be working together soon!"

In a 2012 interviw with Über Röck, Martin talked about how it felt when he got that call asking him if he wanted to be a part of BLACK SABBATH: He said: "It was weird, because my manager at the time was already friends with them. I mean, they used to go to school together, and he was their tour manager during the '70s. Basically, he gave me a call one day and said, "Oi, kid, I want you meet me somewhere, we're gonna take and drive," and I said, "Oh, alright, where we going?" and he said just to meet him. So, I met him and we drove for a while, and ended up at this big house. He got out and rang the doorbell and Iommi answered the door... I was like, "Bloody hell, you could have warned me!" But in I went, nervous as hell, played him a few things and next thing I had audition in London, and that was it — I was in!"

Regarding Iommi's criticisms levelled at Martin in Iommi's "Iron Man: My Journey Through Heaven And Hell With Black Sabbath" book (referring to the Martin period, especially the touring phase following the release of "Cross Purposes" in 1994, the guitarist lambasted his former singer as "unprofessional" and having "no stage presence"),Martin said: "It surprises me. I mean, they never said anything to me. Surely, if you've got a problem, the first person you should say something to is the person that's in the band with you... You don't wait ten years. It sounds like a really stupid thing to say, as they didn't say anything to my face — and, if that's the case, then more fool them for not saying anything, because, you know, we could have fixed it. I said to them, endlessly, that if there was anything they wanted changed, done differently, just to say and we could fix it, but clearly they didn't, they hadn't got the guts to, obviously, and to write about it in a book afterwards seems a bit daft to me. I'm not bitter about it, but it is surprising...it seems a bit stupid to say that after the event."

On the topic of BLACK SABBATH's seemingly deliberate attempts to expunge the Tony Martin period of the band's history, Martin said: "It seems a bit of a waste of ten years of the band's history. To cut that out, they're not just cutting me out, they're cutting themselves out. It seems like cutting your own nose off to spite your face. Why would you want to delete ten years of your history? It seems to me that they've got their minds elsewhere, and whatever brings them the most money seems to be what they go for. I mean, the Ozzy reunion. How many times do you want to go and pay to see them do the same stuff? Okay, people argue that those old songs are people's favorites. Well; it's probably that way because you keep ramming it down people's throats and don't give them a chance to buy anything else. It seems disjointed and disconnected to me, and I don't understand why they would want to even cut themselves out of that history."