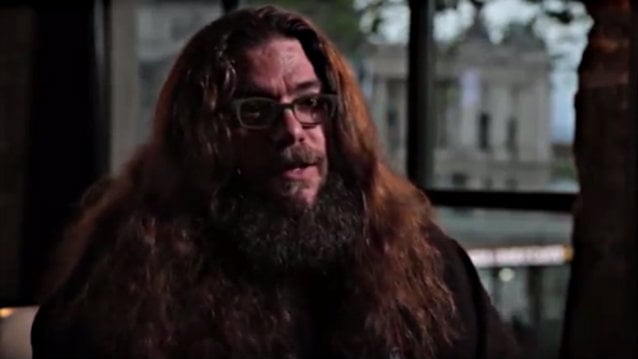 Former CELTIC FROST bassist Martin Eric Ain died yesterday (Saturday, October 21) after suffering a heart attack at the age of 50. His death was confirmed by Ain's close friend Jan Graber, who told Switzerland's 20 Minuten that Martin "suddenly collapsed when he switched to a different tram."

Graber was not aware of any serious health problems that Ain, who was born in the U.S.A., may have had. "He was somewhat overweight, clearly."

Still, Ain's death came as a complete surprise to Graber.

"We had lunch only two weeks ago," he said. "He was doing as well as ever."

Thomas Gabriel Fischer, who played with Martin in both HELLHAMMER and CELTIC FROST, said in a social media post that he was "deeply affected by [Martin's] passing. Our relationship was very complex and definitely not free of conflicts, but Martin's life and mine were very closely intertwined, since we first met in 1982," he wrote.

Norwegian bassist King Ov Hell (real name Tom Cato Visnes; GORGOROTH, GOD SEED, AUDREY HORNE) also commented on Ain's death. He said: "I just learned that my dear friend Martin Ain passed away at age 50. His work with CELTIC FROST and HELLHAMMER has been a huge inspiration for me and thousands of others. Rest in peace, my friend!"

Meanwhile, ANTHRAX drummer Charlie Benante remembered Ain on Twitter as "one of the nicest, intelligent and creative people I've ever known."

Former CARCASS and current ARCH ENEMY guitarist Michael Amott tweeted: "One of the early purveyors of extreme musical darkness in metal has left us."

Norwegian black metallers SATYRICON said in a statement: "Today we mourn the loss of our friend and source of inspiration, Martin Eric Ain. Together with Tom G. Warrior, Martin was the engine of one of the most unique bands in music history, CELTIC FROST. He was reflected, gifted, sympathetic and independent. Our thoughts are with his family and with Tom. Thank you for everything you gave us, Martin. We will miss you."

CRADLE OF FILTH wrote: "Today is a sad day for metal. Martin Eric Ain, bassist for one of the most influential heavy metal bands of all time, has died, age 50. His work in HELLHAMMER and CELTIC FROST were a massive influence on a fledgling CRADLE OF FILTH, as well as hundreds of other bands, and he shall be remembered with glorious respect."

Born Martin Stricker, Martin Eric Ain became an entrepreneur owned a DVD shop and bar in Zurich, called Acapulco. He was also a co-owner of the music club Mascotte, which became well known for hosting up-and-coming international bands. Since 2004, he had been the host of the "Karaoke From Hell" show, taking place every Tuesday night at Mascotte.

In a 2006 interview with Metal Rules, Ain said that, unlike Fischer, he preferred to keep a low profile when he wasn't performing with CELTIC FROST. "I'm exhibitionist enough already with the interviews and on stage," he explained. "I like to let the music speak for itself and the stage performances speak for themselves. I already think Tom does that, Tom does that communication. That's his space, his way of communicating, his views, his beliefs. Some of them are mine. I differ. Not my style."

Ain is survived by his longtime partner, his brother and his father.

I am very sad to wake to the news about Martin Ain, one of the nicest , intelligent and creative people I’ve ever known. #celticfrost 💜😢

One of the early purveyors of extreme musical darkness in Metal has left us. RIP Martin Eric Ain. #martinericain#celticfrost#hellhammerpic.twitter.com/mh2WlIioId

Very sad to hear about Martin Ain,another one gone too soon R.I.P #CelticFrost