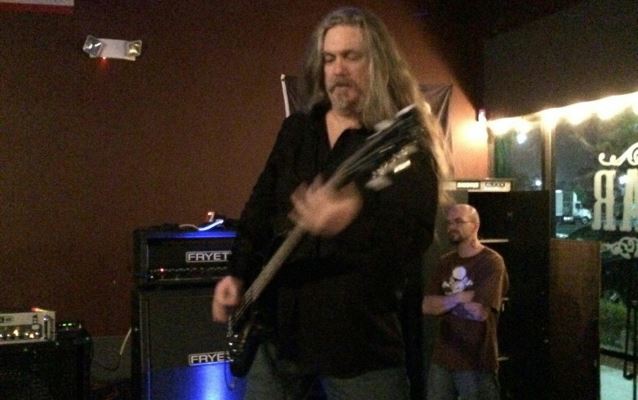 Former DEATH bassist Scott Clendenin has passed away. He was 47 years old.

Eric Greif, the former manager of DEATH and president of Perseverance Holdings Ltd., which manages Chuck Schuldiner's (DEATH, CONTROL DENIED) legacy, wrote on the band's official Facebook page: "With a sense of shock, I'm letting all of you know of the passing today of former DEATH bassist Scott Clendenin. Scott had some health challenges in the last few years but was optimistic about his prospects. Of course he was the skilled player on 'The Sound Of Perseverance' DEATH album, and recently participated in two DTA [DEATH TO ALL] live runs, in 2012 and 2013, including the highlight of his acoustic guitar in a poignant rendition of 'Voice Of The Soul'. Our thoughts go out to Scott's family at this difficult time."

In a 2011 interview, Scott stated about the experience of playing with DEATH and CONTROL DENIED: "It was a great honor to have played with someone so revered as Chuck. I can say it made me a better player and person to be involved in these bands."

Speaking about the ongoing series of DEATH reissues, which are being made available via Relapse, Scott said: "I think it's good to keep Chuck's legacy alive. I think that the fans will have a chance to get his body of work with a whole lot of extra material added to each reissue. Re-releasing a whole catalogue is not something you see done unless it's like THE BEATLES or Elvis [Presley] or someone hugely popular."

Asked in a 2012 interview with Spirit Of Metal what Chuck was like as a person, Scott said: "Very affable, very easygoing, down to earth, animal lover, great cook. [He] just liked to have fun, [and] he wasn't negative. [He led] a healthy lifestyle. That's what kills me… There are so many people who don't try to take care of themselves and live to be 112 and someone who actually does care is stricken with something. But that's a bigger plan than I can speak of, so…"