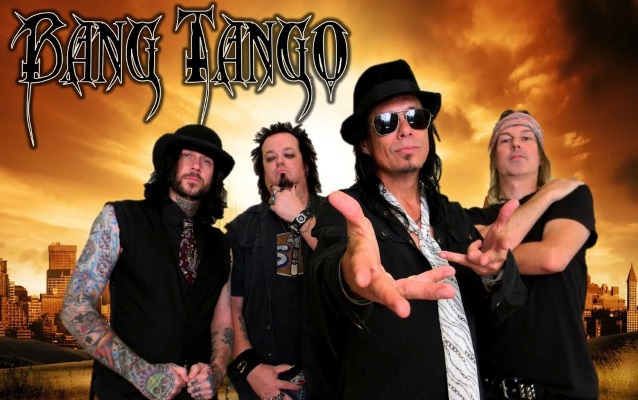 After laying low and taking a much-needed break of nearly a year, BANG TANGO — featuring founding frontman Joe Lesté — will return to the road to celebrate the band's 25th anniversary, rejuvenated and re-energized with the addition of former DIO guitarist Rowan Robertson and a renewed sense of excitement and focus.

"Rowan has been a huge breath of fresh air for us," says Lesté. "We have always been fans of his playing, as well as his work ethic and attitude and we are already writing new material that is the best stuff we have come up with in years. I can't wait for our fans to see this new and improved version of BANG TANGO."

In 1989, Rowan was recruited to join the band DIO when he was only 17 years of age. The experience launched the young guitarist from obscurity to international fame nearly overnight.

BANG TANGO will debut the new lineup as the support act for THE QUIREBOYS on select dates of their 30th-anniversary tour this summer.

2015 is shaping up to be a banner year for BANG TANGO, as the band is already confirmed for hugely successful Monsters Of Rock cruise in April 2015. Select U.S. dates are in the works as well.

Although BANG TANGO was often lumped in with the whole '80s glam metal movement (perhaps due to their pretty-boy looks and the fact that they hailed from Los Angeles),the hard-rockin' quintet was one a few L.A. glam groups to incorporate funk into its sound — around the same time as the RED HOT CHILI PEPPERS and FAITH NO MORE made it acceptable to do so. Their lineup consisted of Lesté, Kyle Stevens (guitar),Mark Knight (guitar),Kyle Kyle (bass),and Tigg Ketler (drums),and piqued the interest of Mechanic/MCA shortly after the quintet issued its first in-concert recordings, 1987's "Live Injection". Following the release of their major-label debut, "Psycho Cafe", in 1989. MTV's "Headbangers Ball" gave significant air time to the single "Someone Like You", and eventually it became a mainstay on the dial MTV charts. The group continued to issue albums throughout the early 1990s, including "Dancin' On Coals", "Ain't No Jive...Live!" and the critically acclaimed "Love After Death".

In 2000, Lesté formed a more modern-sounding alt-metal outfit BEAUTIFUL CREATURES, issuing a self-titled debut the same year on Warner Brothers. BEAUTIFUL CREATURES toured as part of the 2001 Ozzfest and supported KISS on a number of dates.