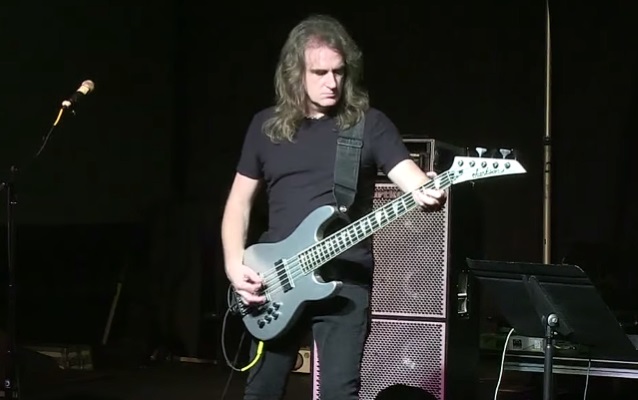 MEGADETH's DAVID ELLEFSON: 'When You Stop Creating, You Start Dying'

In a brand new interview with Orillia Packet & Times, MEGADETH bassist David Ellefson spoke about the band's continued desire to release new music instead of relying solely on its vast catalog every time they hit the road.

"It's important for us to keep new music in the pipeline and to always be creating because, I think, when you stop creating, you start dying," Ellefson said. "As humans, we are wired to look forward to the future. We can remember the past, but we always have to remember to write the script of what our future life is going to be and, for MEGADETH, that's what creating new music is. In a lot of ways, it makes it more challenging because we've created a lot of music and we're very hard on ourselves."

Ellefson also talked about MEGADETH's drive to constantly come up with fresh ideas and not produce material that is derivative of the band's past works.

"That's a common fault in artists who have a legacy of work — it's easy to just defer back to, 'Well, this sounds like something we'd do, so maybe if people think it's familiar, they'll like it again,'" he said. "There's already one 'Symphony Of Destruction' and there's already one 'Holy Wars' and we don't need to go rewrite those. We need to always keep creating new things. For us, that's the exciting and challenging part."

Equally important for MEGADETH is the band's musical diversity and determination to push musical boundaries, even though, by Ellefson's own admission "probably 50% of the [MEGADETH] fan base would love to just hit repeat on 'Rust In Peace'."

He told Orillia Packet & Times: "As far back as 'Killing Is My Business...' ('And Business is Good', the band's 1985 debut album),MEGADETH always had melodies, we had dynamics. Every MEGADETH record we make, we're conscious of that. We don't want 35 minutes of bludgeoning brutality. If you just bludgeon all the time, pretty soon, you get desensitized to it and bludgeoning doesn't even bludgeon anymore. So, to create dynamics and have moods — that's the trick of an artistic musician."