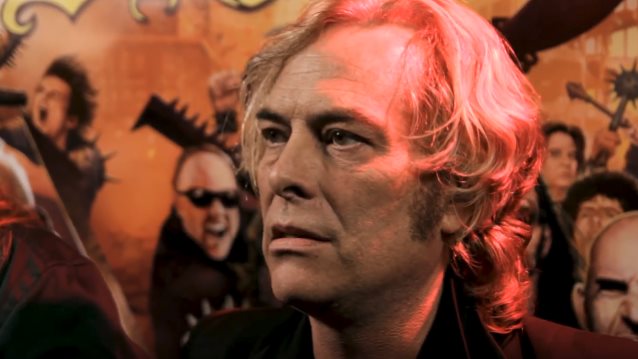 Former DIO keyboardist Scott Warren admits that the upcoming Ronnie James Dio hologram tour "raises some moral issues" but believes that the legendary singer would "absolutely" have wanted to see the trek happen.

The hologram of Ronnie James Dio made its debut at last year's Wacken Open Air festival in Germany. Created by Eyellusion, the surprise appearance of the heavy metal icon during DIO DISCIPLES' set closed out the massive metal event which was attended by more than seventy-five thousand fans.

Eyellusion recently announced initial dates for "Dio Returns: The World Tour", featuring the Ronnie James Dio hologram reunited with the late rock star's former bandmates from the DIO band. The tour will make more than eighty stops around the globe, kicking off in Helsinki, Finland on November 30.

Speaking with Eric Blair of "The Blairing Out With Eric Blair Show" at the October 6 "Bowl For Ronnie" event in Studio City, California, DIO DISCIPLES bassist Bjorn Englen said that "Dio Returns" will see him and his bandmates perform "quite a few songs with the hologram — probably, I would say, about half or maybe more than half. And then the rest of them are gonna be without the hologram, with [Tim] 'Ripper' Owens [ex-JUDAS PRIEST] and Oni Logan [LYNCH MOB] singing," he said (see video below). "So it's gonna be the DIO DISCIPLES. And the hologram is gonna be in the middle of the stage, but I don't wanna reveal too much. It's quite a large… it needs quite a bit of space onstage, so hopefully most of the venues are gonna be able to accommodate that, as far as the places that haven't been booked yet. But we're excited about it. It's gonna be great."

Regarding what is involved in planning a tour like this, Englen said: "We have to do some choreography, as far as where to be and what song and all that stuff. All the music is live, and we obviously have to play to a click track — or Simon [Wright, drums] does — so that we're synced with Ronnie's vocals. Other than that, we play the songs like we normally play them. We've just gotta make sure the arrangements are the same, and they usually are — we haven't done many changes to the songs since the DIO days. So they're the same anyway."

At the same event, Warren was similarly full of praise for the project, saying that "it's really exciting" to see it come together. "It's been so much work that everybody's put in," he said (see video below). "The band, we've kind of had to take a sort of a sideline, but now we're kind of involved in making sure that everything artistically goes right with the image of Ronnie and his movements and all that. Originally I had to do the click track just to get the whole thing off the ground, 'cause that wasn't thought of — how are we gonna do this musically? Now it's gonna be more than one song, and it's gonna be really something."

Asked how he feels about performing with a hologram, Scott said: "How do I feel about it is a really good question, because it raises some moral issues. Just because we can do this, does that mean we should? And we really had to think about it. My conscience is, like, 'Would Ronnie have wanted this?' And absolutely. I think if he would have known about it in his last months of life, he probably would have gone down to the studio and filmed himself to make it happen. This is a major undertaking. I think it's the first time it's been done — going on the road with a hologram."